On August 13, six vet participants from across the United States representing the Army, Marines, USAF, ARNG, and Navy came together at the Flint Rainbow Club in Baldwin, Michigan for a few special days. This private club, which was our generous host, was founded in 1913 by a group of Michigan industrialists and sits on a bluff overlooking the legendary Pere Marquette River. The building, a framed structure, is steeped in history as it has been dismantled and rebuilt military barracks but with modern conveniences.

Jason and James, the local Orvis Fishing Manager and Guides from the store in Royal Oak, Michigan led the full day classes the next day. These included a fly casting refresher, an on stream course in entomology, bugs, (most of them in the water), wading safety, and a guided wade trip on the famed Pere Marquette for the elusive Salmo Trutta.

Days 2-4 were spent drift boat fishing on the Manistee River for smallmouth bass. Hawkins Outfitters guided our gang of six and fish were caught, but heads were shaking.

One participant was overheard the previous night mentioning that smallmouth were “easy” to catch. He learned on the following days that they can, and will be, as elusive and tough, once hooked, and live up to their reputation as the “fightingest game fish pound, for pound.” These fish stood their ground and didn’t come easily to the net. They are gamers! But, so were the PHWFF participants.

Side trips and post-floats included a factory tour of the legendary StealthCraft Boatworks, the historic Pere Marquette River Fly Shop and the must stop in Baldwin, MI, for Jones Handmade Ice Cream.

Once fueled for the next day from Chef Mary’s fabulous and hearty family style meals, the evenings were spent around the campfire, tying flies and sharing local patterns and techniques from their respective streams.

As we drove away for early flight departures on Sunday, the mood was reflective of the time and kinship established in the five days spent together. 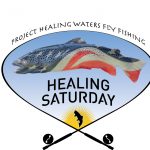