Veterans and nature seem like a logical mix, but recently, two non-profit organizations realized that there was sometimes a gap in the link between the two.

To work on closing that gap, eight disabled vets recently participated in a first of its kind partnership, with Project Healing Waters Fly Fishing and The Nature Conservancy teaming up to host an outing in Montana.

The veterans enjoyed two days of top notch fishing, followed by a day of outdoor activities on TNC’s Pine Butte Preserve near Choteau, MT. The goal was to bring the two groups closer together, building a better awareness of what each organization had to offer by leveraging the strengths of both groups.

“It’s interesting in seeing the reaction and interaction of the vets with a world class environmental group, cause that doesn’t usually fit real well in some people’s minds”, noted Brent Lathrup, TNC’s SE Wyoming director, and an Army veteran himself.

Michelle Kotulski, TNC’s ‘Veterans In Nature’s Service’ Employee Resource Group co-lead, added, “I was speaking to a group of 600 veterans. Only three of them were familiar with our organization and our mission”.

The trip had a deeper purpose than the more common intent of allowing disabled veterans to bond and to heal together. It was intended as an opportunity for the two organizations to explore a longer lasting partnership, where both groups could contribute as well as benefit.

When asked about the desired benefits of a partnership, Kotulski explained, “One of our goals is to hire more veterans. Veterans are a very good return on investment. They are loyal, they stick around. We are trying to find a way to get more veterans interested in working with us. We want to help those guys just getting out of the military and looking for jobs. Out of thousands of employees, we only have 38 self-identified veterans; we really want to up that number dramatically”.

While there may have been some misconceptions and lack of understanding on both sides before the gathering, a lot of that was cleared up simply by both groups being able to interact and talk to each other during the days outdoors and the evenings in the lodge.

Lathrup observed, “It’s good for vets to see how complex and complicated this whole nature management thing is, and how we’re doing it. I also want TNC staff, who haven’t been around military members, to meet the vets and get their perspectives”.

Fred Napoleon, a participant from New Mexico, said, “Speaking for myself… I wasn’t really aware of what TNC was all about, how large it was, how much land they help to protect. I see the benefit in it now; it grows the appreciation after seeing their efforts in providing essential needs in conserving nature”.

Kotulski added, “A lot of environmental folks are ‘scared’ of veterans and that whole PTSD thing. We are trying really hard to shift that stigma. You can have PTSD from a car accident, it doesn’t mean it has to have anything to do with war.”

A large part of that information exchange took place during time in the field together, where TNC employees accompanied the PHWFF participants on their fly fishing ventures, as well as the PHWFF participants being led on educational hikes by TNC personnel. Being able to relax and talk candidly with each other was beneficial to all involved.

The fishing portion of the trip consisted of a day at a local lake, followed by a day of floating the famous Missouri River. All of the PHWFF flyfishers managed to catch, and release, multiple trout. For some, it was their first out-of-state fishing trip.

The day on the river included another first for some of the flyfishers… personal guides. One of those professional guides was Fred Telleen, who was already very supportive of the local PHWFF program in Great Falls, MT. He observed, “With Project Healing Waters, and some of the vets I’ve dealt with over the past few years, there are some pretty powerful stories in everyone’s life. It’s interesting being able to share in part of the sharing, the healing, the brotherhood. I’ve learned how impactful fishing can be for people, regardless of background, but especially for these veterans”.

Besides fishing, the veterans were afforded the opportunity to participate in a hike to the top of Pine Butte, the unique feature for which the preserve is named. During the hike, they were educated on the area’s history, geography, wildlife, and the importance of conserving the land in a responsible manner. As an example, they were shown an improvement in one pasture where water was moved from a spring to a water feature half a mile away, to support cattle that are allowed to graze there, while controlling erosion. They were also told that contrary to some beliefs, hunting was allowed, and even encouraged, on some of their properties as part of a responsible management plan. Kotulski explained, “We are very bi-partisan. Some of our practices surprise people. We are actually very pro-hunting; we use it as a management tool in our overall plan for conservation in certain areas.”

The conservation practices and concepts hit home for some of the veterans. After hearing some of the ideas explained by TNC staff, Napoleon reflected, “I can remember back to my military days, when we were told to take care of the land that we were using on field exercises. That carries forward to today, and now I get it”.

When asked what he hoped to see in this partnership, Lathrup said, “I got involved in this because I’m disappointed in the extremely low numbers of vets in TNC, and I’m trying to find ways to do something about it, especially the bright young vets just coming out of the service. Veterans are ‘Missing In Action’ in the environmental world; I’d really like to see that change in the future. We have a lot of crossover and a lot to offer each other”.

David Folkerts, PHWFF National Programs Officer, added that he thinks there’s a lot of potential for the two groups to continue growing and expanding their relationship. He feels that this collaborative event at the Pine Butte Preserve has set the groundwork for a long term relationship with The Nature Conservancy. He’s excited about future collaborations and the potential it has to have a lasting and positive impact on the disabled veterans that PHWFF serves.

Aside from the partnership, a large part of the trip was an opportunity for the veterans to heal and bond, falling perfectly in line with Project Healing Waters Fly Fishing’s mission of being dedicated to the physical and emotional rehabilitation of disabled active military service personnel and disabled veterans through fly fishing and associated activities including education and outings.

Heyward Wall, a veteran from South Carolina, reflected, “Project Healing Waters has allowed me to come out of my shell a little bit, and now my goal is to help new people come out of their shell. The Nature Conservancy is really in a position to help Project Healing Waters and their vets, and hopefully we can reciprocate and help build up the numbers of vets in their organization. The people here this week stepped up and took on that challenge, and they need a lot of our help to accomplish their goals”.

Telleen summarized the basis of the PHWFF mission…. “When you’re fishing, your mind is totally focused and everything else can just go away; that’s a pretty powerful thing in today’s world”. 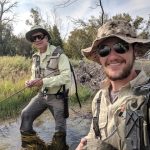 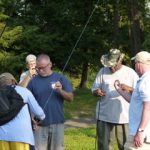