By Johnny Walker and Ron Gard This past weekend, October 11-13, 2019, participants and volunteers, from several Project Healing Waters Fly Fishing programs in the North Texas area, traveled to Lake Emma and the Prairie Rose Ranch, near Miller Grove Texas, for an extended weekend outing. The weekend consisted of the participants having access to 2 small lakes, Emma and Hunter, and several small ponds. All of them are stocked with sunfish, shad, and BIG largemouth bass. We get to stay in the most comfortable cabin you would never expect. It’s a large, fully modern and equipped 2-story cabin. It’s nestled back up the hill, into the trees, overlooking Lake Hunter.

The owner, Ron Gard, has been extremely generous and sharing of his waters, fish, and ranch with PHWFF.

Ron loves having the men and women there and always insists he and his son David be the fishing guides on Lake Emma. They truly enjoy guiding them, but every once in a while, one of those times on the water stands out above the rest. Below, in his own words, is one of those times. The participant in this particular instance goes by the nickname of Bear.

Here is their story from Ron Gard:

I have had a lot of exciting times catching fish on Lake Emma, and elsewhere in the world, but Bear catching his first bass ever, Saturday night  after sunset, with the full moon rising behind us, on a fly he tied, was one of the very best times ever for me, and I think maybe for him.

I had guided him that morning and we never even got a strike. When we went back out Saturday evening after dinner, I looked in his little tackle box, which he carried in a plastic shopping bag. I found one I liked and asked him if he made it and he said, “yes”, “but Jeff (the Fort Worth Program Lead), helped me tie it.”

We had been over the whole lake and never got one strike. As the sun was beginning to set, I said let’s try one more spot before we go in. As you know, Bear doesn’t talk much. I don’t think he had said three words all day. If I ask him a question, he would answer but in very few words. And yet I felt very comfortable with him. He never once stopped casting, concentrating on his casting, or trying to follow any suggestions or instructions I gave him. He had never caught a fish on a fly rod or maybe never caught a fish on anything. We never really discussed it beyond fly fishing. As we were slowly entering the mouth of the cove I wanted to try, Bear got his first strike but the fish came off after a few seconds. We were both very disappointed. He had fished all day and never gotten a strike, then one gets on and comes off before we can net it. I was thinking that may have been our last chance. I think he said something like, “oh”, but that was all he said for a few minutes, and then still concentrating on his casting, he said in a low voice, “I need to catch a fish.”

I was not very hopeful or optimistic at the moment as it was getting dark and we needed to head back. The only light we had was the iPhone and light from the full moon, which was just rising in the east.  I then heard a splash in an open spot in the grass back in the cove. It was too dark to see what it was, but I told Bear that the splash sounded like a bass so let’s see if we can get through the lily pads and weeds and give it one last try for the day.

As were nearing the spot where I heard the splash, one of the best sounds or, at least one of my favorites, the sound of a large bass exploding on a top-water fly. Some of the rest was a blur, and it seemed like 20 minutes to get the fish in the net, but was probably only two or three. I remember seeing Bear on his knees on the floor of the boat with the rod in his right hand and holding the line stretched way out to his left and the two or three feet of the rod tip was under water. As with most beginners he had neglected to put the line under his fore fingers of the hand holding the rod, so he had little control of the fish momentarily, but he had a death grip on the rod and the line, and that fish was not going anywhere unless she could pull Bear over the side, which I thought might happen.

I told him to let the fish have some slack as I thought he was going to go out of the boat, or the leader would break. I don’t think he gave her any slack but just stretched out further and further over the side of the boat. Fortunately, I had put on a new 20 lb tapered leader when I tied on his fly that afternoon. The bass went around the boat, under the boat, got wrapped around a stump, and tangled in the moss and weeds. Finally Bear regained his balance, still on his knees, I think, and got the rod high enough to pull the tired fish close to the back of the boat and I, on my knees, netted that big beautiful bass.  She was just over 5 pounds.

I left the fly in the fish’s mouth in case she jumped out when we put her and the net back in the water, so we could get organized to weigh her and take pictures. Bear wet his hands and picked up the fish perfectly, as if he had done it a thousand times. A quick weight check (she was just over 5 pounds), a few quick pictures, the best one was with the full smiling face of the moon, shining brightly over Bear’s right shoulder and smiling face,. Bear and his 5lbs + Largemouth bass

The fish was released in good shape and with High fives between Bear & I!

The boat and trolling motor had become tangled in the weeds. We got boat untangled and organized, and then weaved our way back through the lily pads and weeds, and out of the cove. As we made our way back across the lake in the light of the full moon, not a ripple on the water except from the wake of our boat, nor a sound except for the bow sliding quietly and gently thru the water. Then I faintly heard the third full sentence from Bear all day, “It is a beautiful night.”

What a great way to end a full day of fly fishing. 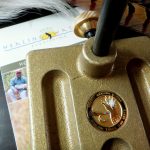 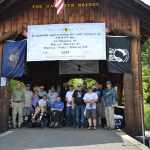