Joint Base Lewis-McChord Hits the Water

On June 12, the PHWFF Joint Base Lewis-McChord Program went out on the Little Deschutes and celebrated being back together again.

Because they didn’t want to over pressure the fish, or the river, outing lead Justin Fordice limited it to seven participants.

“We met up at 6 A.M. to avoid other people and try and catch the fish as they were waking up,” Fordice said. “We compared all of the new gear we have acquired throughout the year, did a safety inspection, topped off our coffee cups and headed out.”

After they got to the river, they did some short knot-tying instructions and showed some of the participants how to set up their rods for euro-nymphing. They discussed the benefits of using indicators versus going without.

“It was a bit awkward at first,” Fordice said about the participants not really knowing one another. “However, because of the shared military backgrounds, it didn’t take long for everyone to resume their brotherhood.”

Although not as successful as they hoped they would be, the participants still totaled about 10 fish in about a three-hour period and the weather cleared up for a nice day out.

The biggest highlight of the trip, according to Fordice, was when participant Stein Boeger, new to everything fly fishing, hooked into his first fish.

“(Stein) wasn’t having any success on the nymphs, so he switched to a balanced leech pattern and hooked into probably the biggest fish on the river,” Fordice said. ” He was so excited that he wasn’t able to put it in the net, but he sent me a message saying ‘thanks a lot, Justin. Because of that fish I am completely hooked!’ ”

Fordice explained that their program is trying to pace themselves when it comes to outings.

“We want quality outings, and not rushed. We plan on doing another one on the Issaquah in July.”

Fordice would especially like to thank Program Manager Katherine Ruark and David Folkerts for their leadership and staying on-top of the engagement plans.

“Kate has been an amazing advocate and her and David have been so helpful in understanding the landscape, and the quality analysis of the risk and safety measures.” 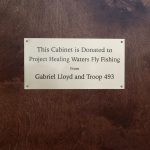 Eagle Scout and Local Troop Gives Back to PHWFFPennsylvania, Regional 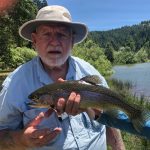