The 2022 Virginia Fly Fishing and Wine Festival held their 21st annual event over the weekend of January 15 and 16 at the Meadow Event Park, just north of Richmond.

Fly fishing vendors, instructors, and professionals from all over the country participated. Women anglers were the focus of this year’s festival, and they kicked it off on Friday with a women’s meet and greet before the festival started.

“Being a female angler I was so encouraged by the number of new faces in attendance this year,” PHWFF volunteer Kiki Galvin said. “In keeping with diversity and inclusion the show was welcoming to all and that was exciting!”

We caught a glimpse of Kyle Chanitz, a PHWFF volunteer, participant, and judge for our 9th Annual Fly Tying Competition!

Campbell said the best part of the weekend was visiting with everyone involved in the fly fishing industry as well as all of the PHWFF participants and volunteers, current, past and future from all over the country.

“I heard story after story about PHWFF events, whether it was destinations or impactful volunteers,” Campbell said. “I literally couldn’t count how many times folks would walk up to our booth and say ‘I’ve heard of you guys; how can I help?'”

If dealing with the pandemic wasn’t enough, festival vendors and attendees alike had to deal with winter storm weather and storm “Izzy”.

By the middle of Sunday afternoon, the snow was coming down steady at the event center. PHWFF persisted and had outlasted even the most die hard of the festival attendees. They made it through, packed their stuff up, and headed slowly home.

“The camaraderie was even apparent on the trip home,” Campbell said.

“We knew we faced some difficult driving so those of us who had came from Southeastern Virginia decided to take back roads in a caravan. Our team work made it so everyone made it home safe but not until those of us who couldn’t resist made a pit stop at our favorite barbecue restaurant in Williamsburg!”

Both Campbell and Galvin would like to thank event organizer Beau Beasley and his dedicated team for the continued effort put into the festival.

Campbell would also like to thank all of the PHWFF volunteers who helped him man the booth over the weekend including Carl Allen, Bubba and Sarah Holt, Larry Wesling, Dave Ward, Mike Weiss, Tom Fink and Jean Graziano.

Campbell said this event is a memory that will last a lifetime.

“In closing, if you have not attended VFFWF, you should put it on your calendar for next year!,” Galvin exclaimed. 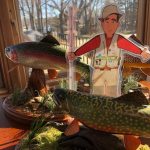 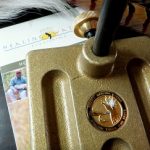