Four guides in drift boats taught the participants techniques for casting and indicator fishing with nymphs for the river’s fabled rainbow trout.  The participants proved up to the task, with everyone learning (almost!) how to water load their casts and demonstrating skill landing sizable fish.  Nights were spent in Redding, California, at the northern end of the state’s 500-mile long central valley where releases from Lake Shasta, the state’s largest reservoir fed by the Pit, McCloud and upper Sacramento Rivers, fosters a fine tail water fishery year round.  Following the day floating and fishing the lower Sacramento River, the vets and volunteers toured The Nature Conservancy’s 30,000+ acre Dye Creek Preserve, which might well become the site of future PHWFF-SF outings (there are bass ponds as well as a bunkhouse for guests on the Preserve). PHWFF-SF’s future outings this summer will introduce its vet participants to more of California’s premier trout waters, while camping at California Trout’s “Trout Camp” on the upper Sacramento River in July, and at The Nature Conservancy’s McCloud River Preserve in August.   After all, as San Francisco-based Lost Coast Outfitter’s motto notes, “Life is better around a campfire.” 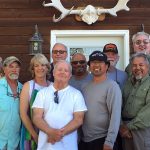 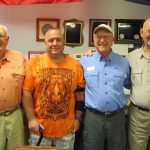