After arriving in Long Beach on Wednesday, June 19 and getting to know each other over a long dinner, Thursday was competition day.   Although the forecast was for high winds, we were blessed with very gentle breezes, overcast skies and a moderate temperature.

Due to some late cancellations, there were just four program champions this year:  Joe Hiney from the San Francisco program, Javey Derr from the Central Valley program, Kris Skinner from the Sepulveda program and Lawrence Diggins from the Long Beach program.   Javey and Lawrence were repeaters from last year’s competition.

The day started with an equipment check followed by a review of rules and practice time.   The Modified 5 Weight Combination Game has two accuracy rounds followed by a distance round, using pie plates and 36-inch hula hoops as primary and secondary targets.  Mark Tsunawaki and Blain Tomlinson were the judges, with Lisa Ornelas as scorekeeper.  Bill Boyce, Richard Macias and Don Lee were the distance judges. In the final round, Joe Hiney had the longest distance cast of the competition at 84 feet, along with a 500-point perfect score on one target for a final score of 2710.   Lawrence Diggins had a perfect 500 also, along with several 300-point targets, and two distance casts over 80 feet that led him to repeat as Southwest Region Casting Champion with a total score of 3480.     Lawrence and Joe will represent the Southwest Region at the National Casting Competition during the Fly Fishers International Expo in Bozeman in a month. Casting is probably the most important skill we teach.   It doesn’t matter how beautiful a hand-made rod is or how realistic a fly is if a fisherman cannot cast it where the fish are.   We have several months of casting classes and include some games for variety.  The Modified 5-Weight Combination Game makes learning accuracy and distance fun by injecting a little competition, and each caster can track his progress as his score improves with practice.     Some of the more motivated participants practice at home by casting at objects or hoops in their yards.   It’s been really gratifying to watch their improvement and enthusiasm over time.   The goal, of course, is to make the participants better fishermen. 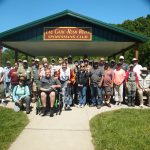 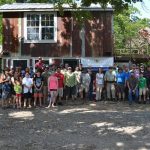