Adam Hicks was raised in rural Mifflin County, Pennsylvania with the Juniata River in his front yard and the Tuscarora State Forest in his back yard. He spent his youth fishing for smallmouth bass and trout in the nearby rivers and streams and chasing whitetail and other game in the surrounding mountains. At the age of 10, he was first introduced to fly fishing by a family friend that had a cabin on Penns Creek and has been infatuated with the sport ever since.

When Adam wasn’t fishing or hunting, you could find him playing football, baseball, wrestling or running track. After graduation from Mt. Union Area High school in 2002, he continued his education at St. Francis University.

In 2006, Adam enlisted in the PA Air National Guard as a Tactical Air Control Party (TACP) Member in the 148 ASOS. During the training process to become a TACP, Adam was diagnosed with cancer. After treatment and recovery, he transitioned his studies to Logistics and later deployed to Kandahar, Afghanistan in 2013 with the 807th EASOS. After serving a little over 10 years in the the PA Air National Guard in multiple capacities (active duty, Technician, guard), Adam retired and fully transitioned into a civilian position.

Additionally, Adam currently works part-time at TCO Fly Shop in Boiling Springs, PA where he helps foster growth and community in the sport.

Adam and his wife, Bobbi, have one son, Sullivan. When Adam’s not coaching Sully’s wrestling and football team, you can find him participating in one of his many hobbies, such as cycling, racing motorcycles, upland bird hunting with his German Shorthaired Pointer, Rose, or fly fishing.

Adam also serves as the Vice President of the Bulldog Youth Cycling Club, is a board member of the Big Spring Youth Wrestling Program, and volunteers as a guide through Reel Recovery. 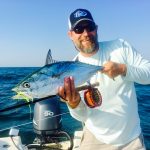