Andrew (Andy) Summa grew up in Central New York where he was introduced to the outdoors as an infant. With family in the Adirondack Mountains and parents that considered camping as “vacations”, he had no choice but to immerse himself in the limitless beauty that can be found in the Northeast. His father introduced him to the importance of giving back at a very young age and by the time he was 8 he was volunteering with the Syracuse Special Olympics. His desire to give back only grew throughout his teen years and he enlisted in The United States Marine Corps at age 17.

Andy served 5 years on active duty with the Marine Corps as an enlisted aircrewman. He participated in countless missions across the globe ranging from humanitarian aid to emergency evacuations. He deployed to Afghanistan in 2010 during Operation Enduring Freedom. Andy finished his enlistment as a Sergeant and aircrew instructor where he was able to mentor the next generation of Marines taking his place.

Shortly after discharging he started a family and returned to school. He obtained his associates degree in fire science/emergency management where he worked as a firefighter and EMT. Despite the honor of serving his community, Andy knew he had to answer to his true calling: serving Veterans. He started working at the Syracuse VA Medical Center in 2014 in a high paced operating room. From there he joined an integrative healthcare team that focused on the physical, emotional, and spiritual wellbeing of disabled Veterans. Andy spent over 4 years as a Veterans Health Coach where he worked with Veterans in a variety of modalities, creating new programs, and building relationships with Veterans in Central New York.

Andy now lives in Syracuse with his wife Marie (who is also a Marine), their three children, Anthony, Luke, and Valerie, and their German Wirehaired Pointer named Blue. In his spare time he enjoys coaching a variety of sports teams and flyfishing for wild and native fish. A Brook Trout lover by heart, you can find him in the backcountry on isolated and hard to reach mountain streams. He continues to work towards two major goals: catch every native trout species in the United States and put a flyrod in every Veteran’s hand.

“I found Project Healing Waters by accident years ago and it completely changed my life. It saved me. To be able to work for this organization is truly a dream come true” 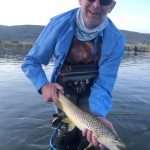