Chris Thompson has been fly fishing and fly tying for nearly 30 years. He is a self-professed saltwater junkie, but gladly wets a line for any fish that will take a fly. He was fortunate enough to be selected to the Temple Fork Outfitters (TFO) Professional Staff as an Ambassador in 2007, and as a result has made close, lasting relationships throughout the fly fishing community. Among those relationships was his introduction to Project Healing Waters Fly Fishing, Inc.

Chris became affiliated with Project Healing Waters in 2007. As part of the TFO Professional Staff, he was asked to assist with a booth at the 2 Fly Tournament held at Rose River Farm, VA. There he met Ed Nicholson, Founder of Project Healing Waters Fly Fishing, Inc., and Douglas Dear, Chairman Emeritus of the Board of Trustees. Their charismatic dedication inspired him, and that event changed his life. He assisted at the 2 Fly Tournament each year thereafter, and then helped start the Quantico Program in 2011. Although he qualifies as a Participant, he spent the next 3 1/2 years serving as a Volunteer with the Quantico and Fort Belvoir Programs. He helped organize a Fly Tying Marathon in the National Museum of the Marine Corps in 2014, and after great success, continues to organize the same event annually. Moving to North Carolina in 2014, he became a Volunteer with the Crystal Coast Program in Swansboro, NC. There he was asked to assist with an outreach program on Camp Lejeune working with Wounded Warrior Battalion East. That resulted in creation of the Camp Lejeune Program in 2017, and his appointment as the Program Lead.

Chris has served as an Ambassador for Project Healing Waters on numerous occasions. He represented the program on two episodes of The Outdoor Channel’s The Seahunter with Captain Rob Fordyce, once during season one and then again in season five. He was also a member of the Project Healing Waters and Ocean Conservancy Team that conducted an ocean cleanup in the vicinity of Sugarloaf Key with the Lower Keys Guide Association.

In 2014, Chris helped friends Tommy Bennett, John Mauser, and John Snipes revive the Cape Lookout Albacore Festival in Atlantic Beach, NC as a fundraiser for Project Healing Water Fly Fishing, Inc. In addition to fundraising, the event provides a day on the water for Project Healing Waters Participants, and has even served as a National Destination Outing. In 2017 the event expanded, becoming the Cape Lookout Albacore and Redfish Festival and Chris became the Co-Chairman of the event. In 2018 he became its Chairman and still serves in that capacity.

Norman Maclean eloquently wrote, “Eventually, all things merge into one, and a river runs through it.” Fly fishing and Project Healing Waters are the river that provides a steady current through Chris’ life. His closest friends are anglers, and most are associated with the program. In fact, he even met his lovely wife, Kellie, through the program. They were married on the banks of Willis Creek by TFO Founder, Rick Pope, and share a love of angling. They still volunteer together, and are the proud parents of five children: Corbin, Forrest, Tristan, Canon and Sophie. 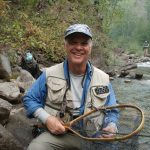 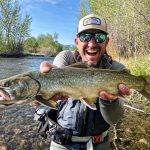