LaPlata, MD – April 1, 2016 – Veterans, volunteers, and celebrities from across the country will gather at Rose River Farm in Syria, Virginia on April 30-May 1, 2016 for the 10th Annual 2-Fly Tournament benefitting Project Healing Waters Fly Fishing, Inc and the thousands of veterans they serve each year

The pre-tournament dinner starts at 5pm on Saturday night April 30th under the stars in picturesque Madison County, Virginia. Tom Brokaw will serve as the keynote speaker for the dinner at Rose River Farm.  Mr. Brokaw has spent his entire distinguished journalism career with NBC News beginning in 1966 in the Los Angeles bureau where he covered Ronald Reagan’s first run for public office, the rise of the Sixties counter culture, the assassination of Bobby Kennedy and the 1968 presidential campaign.

He has won every major award in his craft, including Peabody, Duponts, Emmys and lifetime achievement recognition.  In November of 2014 Brokaw was awarded the Medal of Freedom by President Barack Obama, the highest civilian award given to those who made “meritorious contribution to the security or national interests of the United States, world peace, cultural or other significant public or private endeavors.”

For a little more than a decade Project Healing Waters Fly Fishing (PHWFF) has focused on healing those who serve.  It is through the tremendous contributions of our volunteers and supporters nationwide that last year we served over 7400 deserving members of our armed services.

The tournament competition kicks off at 7:00 a.m. Sunday morning May 1st and features PHWFF participants from across the nation.  Military/veteran participants will be partnered with a professional fly fishing guide from among the most notable names in the sport including Lefty Kreh, Joe Humphreys, and Ed Jaworowski.  For complete details on the 2-Fly Tournament and special guests click here

Project Healing Waters Fly Fishing, Inc. is a 501(c)3 non-profit dedicated to the physical and emotional rehabilitation of disabled active military service personnel and veterans through fly fishing and fly tying education and outings. The 2-Fly Tournament is the organization’s flagship event to raise awareness and funding for its 200+ programs in all 50 states and Puerto Rico. 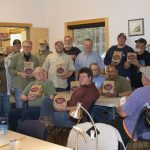 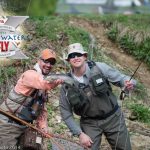