Mark your calendars and set your DVRs!  You don’t want to miss a special episode of The Seahunter this week on The Outdoors Channel! This very special episode dubbed “God’s Country” was filmed this past October at Freedom Ranch for Heroes in Wise River, MT and features Jim Graham, U.S Army (ret) of our Long Beach, CA program. You can see some great photos and a video teaser below.

The show will air on The Outdoors Channel this upcoming week at the following times:

(Be sure to check your local listings for regional airtimes or visit https://www.outdoorchannel.com/show/the-seahunter/1453)

“In 1976 I was a range instructor on a M-203 range.   The range adjacent to mine was in control and shifted fire 30 degrees in the wrong direction.  My range took about a 2000 rounds of   M-16 fire. Everyone was down in fox holes, but, being the range instructor, I was the only one standing. I was shot in my left flank. I had six high explosive rounds strapped to my waist. I’ve always had nightmares of me turning into a red puff of smoke. The bullet was removed one year later due to infection in my stomach.  One week after being shot I was due to go to primary noncommissioned officers candidate school to be promoted to Sargent. Due to injuries I was assigned as assistant company armor and drive for the company’s first sergeant.  Upon return from a field training exercise the first Sargent and I were cleaning the vehicle and the vehicle was tipped over and I was hit and sustained a concussion and a crushed wrist. I was also involved in a major automobile accident and my best friend passed away in my arms. Being his squad leader I always felt guilty for him losing his life.

After being discharged from the Army I struggled with life.  I never felt like I fit in and felt like I was a loser. I struggled with addiction for many years. I never felt safe.   38 years later life got really bad for me and I went back to the VA for help and I found this amazing place that is willing to help. I’ve received a rating 100% and been under their care. I am really involved with volunteer work and my passion is helping other veterans. Several years ago a friend in my PTSD group told me about PHWFF. My first thought was they don’t want anything to do with me (I’m not good enough) and I was pleasantly surprised at the love and support I got from the vets and the volunteers. Quickly my guard was down and I started getting excited and involved in this wonderful program. I feel a great sense of freedom from my personal demons. This program has taught me the feeling of being safe and that everything is OK. I’ve been on several trips and every time I come home I feel a great deal of personal growth.   Recently I’ve learned catching a fish is only a bonus. I get so much healing from the love and support I receive from the group.  I feel safe and everything is OK. Thank you, PHWFF you’ve changed my life.” 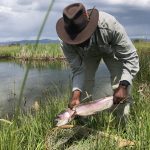 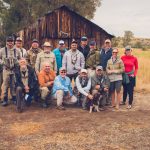