A Veteran Reflects on the Kenai Peninsula

As I sit here waiting to depart Anchorage AK heading home to Indianapolis I am thinking about the past 4 days on the Kenai Peninsula.

When I was asked if I would like to attend a National PHWFF trip to Coopers Landing AK I was thrilled. I had never been to Alaska and immediately said yes. Soon afterwards I began researching the Kenai River, Coopers Landing and Kenai River Drifters Lodge. While learning about this I got the excitement and anticipation grew. A chance to see the “Land of The Midnight Sun” and fish for silver salmon, monster rainbow trout and  beautiful dolly varden.

Finally the day arrived to depart and I woke up 30 minutes before my 4 am alarm. I was so excited to go to Alaska. Once I arrived I had gotten a text message that the trip lead, Leslie Holland-Bartels, was waiting for me at the baggage claim.  On the flight up I had read the bios of the other 6 participants. Mark A, Mark B, Matt, John, Alec, and Sean all had different backgrounds from different branches but when I met 2 of them that were on the same flight I felt as I already knew them. We grabbed our bags and waited on the rest of the group to arrive.

We went and visited a fly shop and got licenses while waiting on a later arrival. There was a lot of questions and conversations going on between my brothers in arms while we traveled to our destination “The Kenai River”. The scenery was so much more beautiful than any of the pictures with towering peaks and glaciers. We even saw some Beluga Whales.

Once at the lodge we were met by the owner “Bob”. He was a great host and ensured all of our needs were met. Later that evening we met guides who explained what the options for fishing were. We could fish for silver salmon or trout or a combination of both. While 4 of us decided we wanted to target salmon and 3 wanting to target both boat assignments were complete.

Day 1 on the River was tough for our boat while the other boat caught a mixed bag of 1 silver salmon and numerous rainbows and dollies with everyone in the other boat catching fish and mine getting skunked. It was still an amazing day seeing the river in daylight and observing numerous seals and bald eagles.

Day 2 we shifted plans. We decided to try silvers early and change to trout later. The silvers alluded us once again but after switching to target rainbows we all started catching numerous fish of both rainbows and dollies. We even got to see several moose.

Our guide knew how much our bout wanted to catch salmon so he rearranged a complicated schedule so he could take us again but to a different section of the river where he thought the fishing might possibly be better. Day 3 the weather was much different. We woke to heavy rain and some wind but were excited to see what the day would bring. This section was much different with faster water and towering mountains on both banks.

At our first hole we exited the boat and began fishing. Very shortly the first fish was hooked. A very red sockeye salmon while not our target it had gotten the ball rolling. Several of these were caught before the first silver was caught. The cold and rain were totally forgotten about by this time. As we continued to drift and stop to fish holes everyone caught fish and in good numbers.

We were all very happy with the way the day went and were pleased we stuck with our plan. That evening we went for dinner and many stories were told about fish caught and the one that got away.  Possibly the “guides fault” but we will never know for sure.

Once back at the lodge we began preparing to depart. We packed and turned in waders. We shared pictures and contact information.  This morning I felt both happy and sad. I had bonded with this group of people over the common theme of all things flyfishing.  As the last one to depart I watched all of my new brothers leave I felt a sadness that is hard to explain. While I will stay in touch with them I know there are several I most likely will not see again but know that they will share their enthusiasm of the sport with other veterans to help with healing.

I know that there are many other trips still scheduled to various locations and different target species. I know other Veterans will be having similar bonding experiences. It makes me happy to know others in the future will have amazing experiences because of the Project Healing Waters Fly Fishing.

This program is truly life changing.

Thanks to all of you for a wonderful week and a memory of a lifetime. 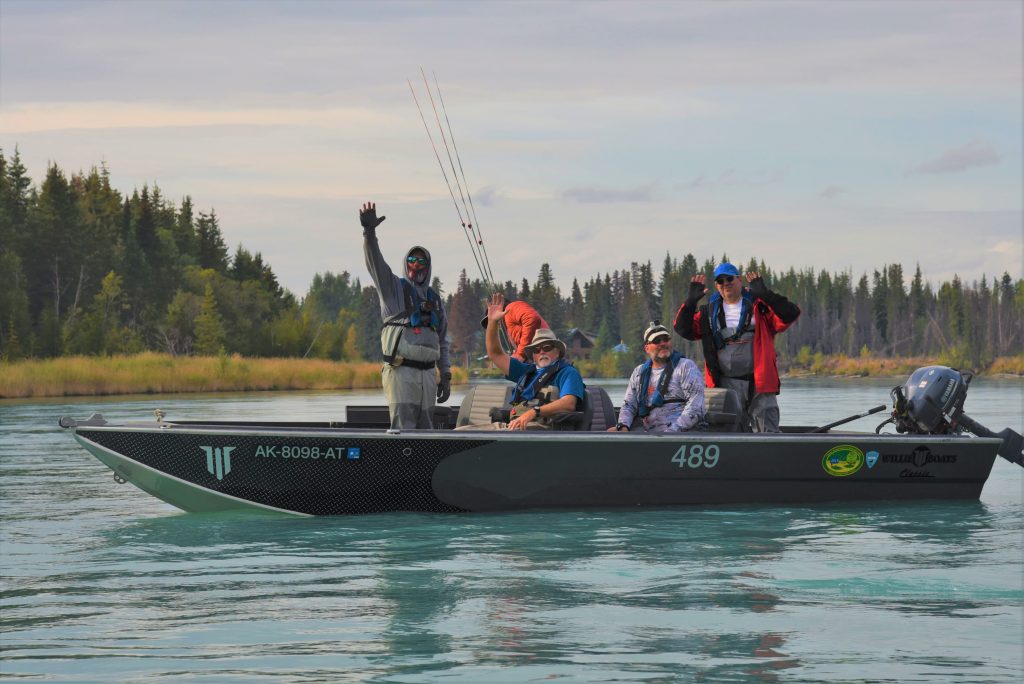