New York, New York:  Personalized wardrobe fittings by Chico’s, custom hair and beard trims from Blind Barbers, relaxing yoga and massages were all on the itinerary before over 60 wounded warriors and their caregivers attended the premier Stand Up for Heroes concert and comedy show that featured Jon Stewart, Sheryl Crow, and the Boss himself – Bruce Springsteen.

Annually the Bob Woodruff Foundation (BWF) hosts a gala to raise funds and awareness to further their vision to create long-lasting positive outcomes for our nation’s wounded, ill, and injured veterans, service members and their families.  This year was a special occasion as four Project Healing Waters Fly Fishing (PHWFF) participants from the Walter Reed chapter were among the attendees. These participants became familiar with BWF by participating in the annual PHWFF fly rod building competition, which BWF funded.

In early January 2019, more than a dozen service members and veterans, along with PHWFF volunteers gathered at the USO on Naval Support Activity Bethesda to build fly rods that they used on local fly-fishing trips.  Using rod blanks, the participants learned techniques to align the spline, ream cork handles, wrap the guides, and by the end of the two-day workshop, epoxy it all together in order to catch fish in the spring with their own hand tied flies.

On a trip to the National Capital Region last April, BWF Chief Program Officer, Dr. Margaret “Meg” Harrell stopped by Walter Reed National Military Medical Center to witness first-hand the benefits of their support. The participants demonstrated rod building techniques and showed off their handiwork. Meg spent nearly an hour talking with PHWFF participants.  She was so impressed with their enthusiasm and commitment that she extended an invitation to BWF’s 13th Annual Stand Up for Heroes gala in New York City.

Four participants accepted the invitation, including Peter Way, who provided a moving testimony in front of a packed Hulu Theater at Madison Square Garden.  Known simply as “Pete” among the PHWFF volunteers and participants, he captivated the crowd with his story of resilience and gratitude. An inspiring short video highlighted Pete’s injury in Afghanistan, his road to recovery, and the impact that caring foundations have on wounded service members and their families. “At the end of the day, I think the message is pretty simple. No one can accomplish the mission alone” Pete commented. He and his service dog Rory received a standing ovation from a clearly moved audience.

“This weekend was amazing. It was a once in a lifetime experience” said PHWFF participant Valerie Takesue who was joined by her brother and fellow Army veteran Burt.  From fully catered dinners, tours of the 9/11 Memorial Museum, NBC Studios, and a VIP Reception at the Gotham Hall, this opportunity allowed our wounded warriors and their caregivers a chance to relax, make new friends, and be recognized by thankful organizations.  Meg was pretty impressed too, “this weekend is also treasured within the BWF team because it allows us to reconnect with the population we serve. We always look forward to it and enjoy it, but this year it just seemed especially fun.”

Project Healing Waters Fly Fishing is deeply grateful for the Bob Woodruff Foundation’s support and continued partnership in providing support to our nation’s wounded warriors and their families.

More information on BWF’s amazing support to our Heroes who answer our Nation’s call to service and their families can be found at https://bobwoodrufffoundation.org/. 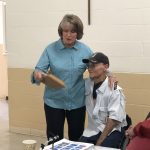 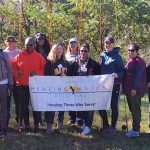