We are pleased to announce that Bubba Holt has been named Regional Coordinator for the West Virginia Region of Project Healing Waters Fly Fishing!  Join us in welcoming him and congratulating him on his new role!

The West Virginia Region has 9 programs.  You can find a complete list of programs, contact information, and news stories for this great region by clicking here. Bubba Holt has had a love of fishing his entire life, and for the last several years, he has devoted many hours, days, and weekends to teaching others how to fly fish. Not only does he love to fish and teach others how to fish, he appreciates the science behind it and sharing that with others.

Bubba attended Washington and Jefferson College and WVU at Parkersburg with the goal of becoming a chemistry teacher, but ended up being a chemical analyst at Constellium Rolled Products. He was treasurer of WVCTU and ran the fly fishing school for the state for six years.

He has volunteered for many stream cleanups and fingerling stockings in West Virginia, one of his most favorite being the Elkhorn Stream Cleanup, that he started helping with under one of his mentors, Ernie Nester. Each year, this event has over 100 volunteers cleaning up nearly three miles of Elkhorn Creek and its tributaries in McDowell County in West Virginia.

In 2013, his life took a major twist when he had a car accident coming home from work one night, and he shattered C4 through C6 in his neck. After an emergency surgery, he had to learn how to walk and use his arms again.  During his recovery period, Bubba found out firsthand just how much healing can be had with stream therapy. During his intense time of rehabilitation, one of the groups that reached out to him the most were volunteers and veterans from Project Healing Waters. He had just started volunteering and guiding with the Ft. Belvoir program during their event in West Virginia every December. He had formed a tight knit bond with the other volunteers and especially the veterans, teaching them the love of fly fishing, and learning so much from them in the process.

So, when he was asked to become the program lead for PHWFF Parkersburg, he didn’t hesitate. He has said many times that this program has done more for him than anyone will ever know. Because of everything his veterans have been through, they have helped him through some of the darkest times of his life after his accident, and have helped him find the joy in life again and the love of fishing.

Beyond working with Project Healing Waters, Bubba works with other groups in the area, making presentations about fishing and cold water conservation in West Virginia. He has done this with local schools, local garden clubs, and local Trout Unlimited Chapters. Bubba believes West Virginia has so much to offer in the way of beauty and sport, and to be able to teach that while giving back to our veterans is more than he could have ever asked for.

Although Bubba is not a veteran himself, PHWFF has helped him recover much like it has helped so many of our nation’s veterans. He looks forward to sharing that experience with all those out there needing some stream therapy.

Bubba is a proud father to two children – Brett, age 9 and Emma, age 7 – and husband to his lovely wife, Sarah, who also volunteers with Project Healing Waters. 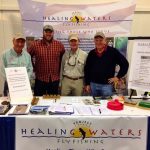 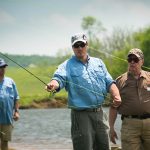