Mark your calendars and set your DVRs!  Project Healing Waters Fly Fishing and Kyle Chanitz will be featured on The Seahunter this week on The Outdoors Channel!  You can see some great photos and video sneak peek from this special episode below.

The show will air on The Outdoors Channel this upcoming week at the following times:

(Be sure to check your local listings for regional airtimes or visit www.outdoorchannel.com/show/the-seahunter)

Sneak peek at this weeks @theseahuntertv episode featuring PHWFF veteran @kyle_chanitz_fly_tying! Tune-in or set your DVR! . The show will air this week on The Outdoors Channel at the following times Thursday at 9:30AM Saturday at 10:30AM Sunday at 7:30AM . (Be sure to check your local listings). . . . #phwff #flyfishing #flytying #healingthosewhoserve #military #veterans #projecthealingwaters #nonprofit #theseahunter #outdoorschannel #TV

In his own words: “I grew up an hour from NYC in an Italian neighborhood called Endwell, NY.  I was in the 9th grade when 9/11 happened, and it was then I knew that I would fight for my country.  On May 26h, 2006 I enlisted into the US Army. I was sent to infantry school and then airborne school at Fort Benning, Georgia.  My first duty assignment was the 82nd Airborne in Fayetteville, NC. I went back to Fort Benning and on September 27, 2007, graduated from the Army’s Sniper Course.   My first deployment to Afghanistan was in January, 2008 where I encountered IED blasts and firefights.  I witnessed my first combat related deaths:  a Hungarian EOD technician was working on a landmine which was triple stacked, and the bottom two detonated as he decommissioned the top mine. An image that replays in my head, to this very day, every day.

In March, 2008, returned stateside for one month deploying again to Afghanistan in April, 2008.  Around June, 2008, my life changed forever.  Too many of my brothers had died or been maimed. I became cold and detached. I was given methylphenidate to stay awake and I took klonopin to control my shakiness that the methylphenidate caused. I soon was given opium from one of my Afghan army brothers, Three weeks after my first use of opium I was using it daily.  I returned stateside on December 31, 2008, still using narcotics heavily.

Eventually I was back in Afghanistan for my third tour. While at a small OP in Nangahar  province I lost too many brothers.  With only 46 days into the tour I suffered my second severe concussion, left eardrum was blown, I now suffer seizures and migraines. That was it for me, my tour stoped that day. Hey I was headed back to Bragg, where I spent my last 2 years in the Army training other soldiers that were going to be part of ETTs in Afghanistan.  I received an Honorable Discharge in May, 2012.  My life began to collapse entirely.

In August, 2014, I landed at the Salem VAMC, dried out for 2 weeks, then went into a 28 day substance abuse program.  After discharge, I am homeless, I have no money.  I went into Trust House, a halfway house which has 15 vets living there.  By January 1, 2015, I had been sober since I first checked into the VA in August.  In February I met Bob Crawshaw and Jake Blizzard of Project Healing Waters Fly Fishing.  My life now has something in it I can obsess over and be passionate about that is healthy.  My life revolves around fly tying and fly fishing. I have attended many PHWFF trips and events.  I am now giving back.  I now guide my fellow veterans and teach them fly tying.  Being able to feel that fellowship again is wonderful.  I no longer hate myself, for the first time in a long time, my life revolves around wanting to live free and healthy.  And, on October 7, 2017, I got married to the love of my life.  My future is bright indeed.” 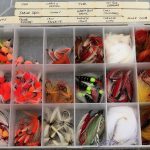 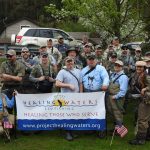