LaPlata, MD – April 9, 2018 – Veterans, volunteers, and celebrities from across the country will gather at Rose River Farm in Syria, Virginia on April 28 – 29, 2018 for the 12th Annual 2-Fly Tournament benefiting Project Healing Waters Fly Fishing, Inc (PHWFF) and the thousands of disabled veterans the organization serves each year.  Now in it’s second decade as the flagship fundraiser for PHWFF, the 2-Fly Tournament provides vital support for this top-tier Veterans Service Organization and serves to raise awareness for it’s remarkable contributions towards the recovery and rehabilitation of those who have made great sacrifices in the service of our nation.

The pre-tournament dinner starts at 5pm on Saturday night April 28th under the stars in picturesque Madison County, Virginia.

Medal of Honor recipient Colonel Donald Ballard will serve as the keynote speaker for the dinner at Rose River Farm.  “Doc” Ballard was credited for saving several Marine’s lives and was wounded 8 times himself. He was med-evaced to Japan for treatment and he was awarded his third Purple Heart medal.  In February 1970 He left the Navy and Joined the US Army.   On May 14th 1970 “Doc” Ballard received the Medal of Honor from President Nixon in a White House ceremony.  After returning home he decided to stay home.  He joined the Police Dept in North Kansas City Missouri, after serving 7 years he then switched to the Fire Department and retired as a Captain after 20 years of service. He also joined the Kansas Army National Guard as a second lieutenant Medical Service Corps. He served a very distinguished military career for a total of 35 years as E-1 to O-6.  In 1998 he was promoted to the rank of Full Bird Colonel and retired in 2000.

For a little more than a decade Project Healing Waters Fly Fishing (PHWFF) has focused on healing those who serve.  It is through the tremendous contributions of our volunteers and supporters nationwide that last year alone PHWFF served over 8,400 deserving members of our armed services.

The tournament competition kicks off at 7:00 a.m. Sunday morning April 29th and features 12 PHWFF participants from across the nation.  Military/veteran participants will be partnered with a professional fly fishing guide from among the most notable names in the sport.  For complete details on the 2-Fly Tournament, special guests, and the online auction click here

Project Healing Waters Fly Fishing, Inc. is a 501(c)3 non-profit dedicated to the physical and emotional rehabilitation of disabled active military service personnel and veterans through fly fishing and fly tying education and outings. The 2-Fly Tournament is the organization’s flagship event to raise awareness and funding for its 200+ programs serving our Nation’s wounded, ill, and injured active duty military and disabled veterans with proven  physical and emotional rehabilitation. 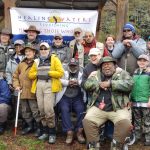 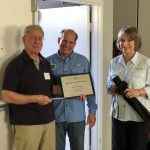 The Southwest Region of Project Healing Waters Fly Fishing announces their 2017 Volunteers of the YearRegional, Southwest