The 10th Annual 2-Fly Tournament at beautiful Rose River Farms to support Project Healing Waters Fly Fishing is being held April 30 – May 1, 2016. The fun kicks off with dinner under the stars Saturday night and Sunday sees fly fishing tournament action with PHWFF veteran participants from around the country compete, guided by industry professionals. Joining us for the weekend are numerous special guests and we’re very pleased to announce that renowned angler, Joe Humphreys, will be among them!

Joseph Humphreys is a nationally known fly fisherman, conservationist, author, and educator.  He has been a fishing instructor to anyone who wants to learn the sport, including VIPs, for over 45 years.  Joe has traveled the world representing the U.S. in fly fishing competitions, has guided presidents & celebrities, held the Pennsylvania state record, hosted the first national fly fishing show on ESPN, and was inducted into the Fly Fishing Hall of Fame.

Joe is also a published author of numerous books and articles on the sport of fly fishing, including: Trout Tactics, Trout Tactics Revised, and On the Trout Stream.  In addition to these major and well-respected works, he is a regular contributor to regional and national journals and periodicals.  Along with his writing, he has also produced and starred in several highly successful videos including, “A Casting Approach to Nymphing Tactics”, “A Casting Approach to Dryfly Tactics in the Brush”, “A Casting Approach to Flyfishing to Catch Fish, Not Just to Cast”, “The Dryfly and the Top Water Game”, and the Telly Award winner for Best Video, “The Night Game”.

As one of the foremost educators in angling, Joe Humphreys directed the renowned angling program at the Pennsylvania State University for nineteen years, providing introductions and foundations to young and old for a life-long enjoyment of the sport.  He has lectured throughout the United States enhancing the reputation of Pennsylvania fishing.

Joe’s passions also include working with local and national organizations to improve stream quality. He’s proud that his students have become the advocacy base to sustain Pennsylvania waters and believes that teaching youth to fly fish, including the U.S. Youth Fly Fishing Team, is pertinent for further protection of and respect for the environment.

Joe also dedicates his time to honoring our Veterans through his support of Project Healing Waters and strongly believes in the healing properties of streams.

A documentary titled, “Live the Stream” is currently being filmed about Joe’s life on and off the stream. Learn about it here www.livethestreamfilm.com

The pre-tournament dinner starts at 5pm on Saturday night April 30th under the stars in picturesque Madison County, Virginia.  Tom Brokaw will serve as the keynote speaker for the dinner at Rose River Farm.

The tournament competition kicks off at 7:00 a.m. Sunday morning May 1st and features PHWFF participants from across the nation.  Military/veteran participants will be partnered with a professional fly fishing guide from among the most notable names in the sport. For complete details on the 2-Fly Tournament and special guests click here

For a little more than a decade Project Healing Waters Fly Fishing (PHWFF) has focused on healing those who serve.  It is through the tremendous contributions of our volunteers and supporters nationwide that last year we served over 7400 deserving members of our armed services 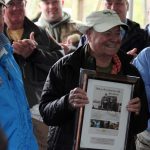