LaPlata, MD – April 6, 2017 – Project Healing Waters Fly Fishing is pleased to announce that Tara Wheeler will serve as Master of Ceremonies at the 11th Annual 2-Fly Tournament on Saturday April 29, 2017 at Rose River Farm in Syria, Virginia.  Ms. Wheeler will address the pre-tournament dinner at 5pm on Saturday night under the stars in picturesque Madison County.   Veterans, volunteers, and celebrities from across the country will gather for the 11th Annual 2-Fly Tournament benefiting Project Healing Waters Fly Fishing, Inc (PHWFF) and the thousands of disabled veterans the organization serves each year.  Now entering it’s second decade as the flagship fundraiser for PHWFF, the 2-Fly Tournament has provided vital support for this top-tier Veterans Service Organization and served to raise awareness for it’s remarkable contributions towards the recovery and rehabilitation of those who have made great sacrifices in the service of our nation. Tara Wheeler is the evening anchor for CBS19 News in Charlottesville after spending three years anchoring the morning news in Roanoke. A graduate of Penn State University with a degree in journalism, Tara was also the starting goalie for the Penn State women’s ice hockey team. Tara has a strong military background growing up as a proud “Army Brat” moving all around the country with her paratrooper dad. Half of her education was paid for through the Air Force ROTC program. She served in the Air Force reserves until 2006. The other half of her education was paid for by the Miss America Organization.

Tara was crowned Miss Virginia 2008, and was a Quality of Life finalist at the 2009 Miss America pageant. She believes that “Beauty is as Beauty Does” and used her title to raise more than $50,000 for pediatric cancer research when she partnered with the St. Baldrick’s Foundation and shaved her head BALD in solidarity with the children fighting the disease.  In her free time, Tara teaches dance fitness at ACAC and loves spending time with her baby boy, who just turned two! 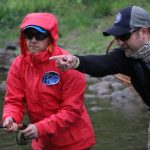 Meet the Guides for the 11th Annual 2-Fly TournamentAnnouncements, In The News, Press Releases, Regional