LaPlata, MD – April 13, 2018 – Project Healing Waters Fly Fishing is pleased to announce that Tara Wheeler will serve as Master of Ceremonies at the 12th Annual 2-Fly Tournament on Saturday April 28, 2018 at Rose River Farm in Syria, Virginia.  Ms. Wheeler will address the pre-tournament dinner at 5pm on Saturday night under the stars in picturesque Madison County.   Veterans, volunteers, and celebrities from across the country will gather for the 11th Annual 2-Fly Tournament benefiting Project Healing Waters Fly Fishing, Inc (PHWFF) and the thousands of disabled veterans the organization serves each year.  Now entering it’s second decade as the flagship fundraiser for PHWFF, the 2-Fly Tournament has provided vital support for this top-tier Veterans Service Organization and served to raise awareness for it’s remarkable contributions towards the recovery and rehabilitation of those who have made great sacrifices in the service of our nation. Tara Wheeler is an award-winning anchor for CBS19 News in Charlottesville. A familiar face around town, she is also the in-arena host for the University of Virginia Football and Men’s Basketball games as well as a Master Instructor for “Dance Fusion”, a dance fitness program at ACAC.  In 2008, she was crowned Miss Virginia and was a Quality of Life finalist at Miss America. Believing that “beauty is as beauty does”, Tara used her platform to raise more than $50,000 for pediatric cancer research by shaving her head bald in solidarity with children battling the disease. Half of her education was paid for by the Miss America program; the other half by the Air Force. Tara was an AFROTC cadet at Penn State and was honorably discharged from the Air Force Reserves in 2006. While at Penn State, Tara was the starting goalie for the women’s ice hockey team and still plays in local adult leagues. Of all the random roles she’s played in her life, she’s most proud to be “mommy” to 3-year-old Wheeler.

Tara has been involved in supporting Project Healing Waters Fly Fishing for many years now and, coming from a military family, it’s an honor to return as the emcee of such a special event.

For a over a decade Project Healing Waters Fly Fishing (PHWFF)  has focused on healing those who serve.  It is through the tremendous contributions of our volunteers and supporters nationwide that last year we served over 8,400 deserving members of our armed services.   The 12th Annual 2-Fly Tournament will serve to raise funds to provide veterans with the support they need on their journeys to recovery as we continue in our second decade of service.  Learn more 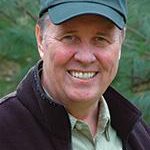 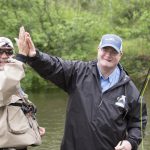