Having served in the Army during Vietnam, Gary became a participant in the Long Beach PHWFF program in 2011 and Virginia helped as a volunteer. In 2011 when Garry Morfit of Healing Towers in Alaska asked the Long Beach Program Lead to recommend a veteran participant who was “able-bodied” in order to help with two other participants who had serious physical disabilities, Gary was nominated. Gary Powell and Garry Morfit hit it off immediately and became good friends. Gary and Virginia have returned to Alaska every year to help at Healing Towers.

Motivating by wanting to continue to do more, early in 2013 they purchased a home in Ketchikan that has its own waterfall and named it Healing Waterfall. The driveway is lined with service flags of every branch and leads to a comfortable home on the ocean with a spectacular window view and, with four bedrooms, sleeps up to twelve people. The Powell’s spend seven months each year there, sometimes hosting as many as 72 PHWFF participants in a season. They meet incoming PHWFF guests at the airport, take them to get fishing licenses and groceries, host them at Healing Waterfall and fish locally before taking the participants to Healing Towers and helping there. They repeat the process at the end of each trip.

Like so many of our participants, their boat, the Warrior Salvation, was a recovery boat, having been partially submerged and abandoned. They lovingly restored it to operating condition and now use it for fishing and local transportation.

Garry Morfit said “Since Gary and Virginia became involved on a more permanent basis, the Alaska program has improved by leaps and bounds. There could not be better ambassadors for PHWFF than the Powell’s. They are engaging, sincere and totally dedicated to the Vets. You can tell by the letters we get back that there is true admiration for the love they project.”  One of the disabled veterans who has spent time there says the Powell’s provide “a few days to forget about our problems, physical pain, the emotions of PTSD and war. And it is all done with love, laughter and a smile that never subsides.” 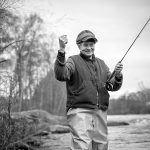 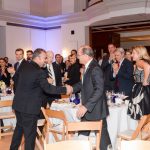 The Inaugural Healing on the Fly BostonAnnouncements, In The News, Press Releases, Regional