George’s journey to Project Healing Waters Fly Fishing began with a chance phone call over 10 years ago. Some guy (he turned out to be a retired Navy Captain) who was a patient at Walter Reed Hospital, was calling the National Capital Chapter of Trout Unlimited (NCC-TU) looking for some help. He was very concerned about the injured and disabled active military patients at the Hospital and wanted help to “take them fishing.” He said, “They really need to get out of here and go fishing.” George, who had worked at the National Institutes of Health (NIH) for over 35 years then, got the call because he was the current President of the NCC-TU. He remembers that it took the caller, PHWFF Founder Ed Nicholson, about two minutes to get him to say “Yes Sir, you bet we’ll help.” So NCC-TU became the sponsor of the Walter Reed group that developed into the first PHWFF local program, and for a year and a half it provided the operating funds that launched PHWFF. George became the first PHWFF Treasurer and a Member of the original Board of Trustees.

Ironically, George, who had worked with NIH’s National Center for Medical Rehabilitation Research, had served as a volunteer at Walter Reed Hospital and had tried quite unsuccessfully to take some patients fishing. It took the Captain’s refusal to take no for an answer that got the organization established. George has said, “I don’t think anyone other than Ed could have made it happen.”

Since that call, George has been instrumental in the growth of Project Healing Waters Fly Fishing as he has served as Program Lead, National Capital Regional Coordinator, a Member of the Board of Trustees, and more. His contributions to our cause and the disabled veterans we serve cannot be overstated.

Born and raised in Louisiana, George came to Washington, DC at age 16 to be a Page in the U.S. House of Representatives. His keen interest in politics led him through a series of senior political positions in the Nation’s Capital that ranged from Capitol Hill jobs, to Assistant to DC’s first Mayor, and eventually to being a member of the White House Staff. That experience led to his 43-year career handling Congressional Relations and liaison to outside organizations at NIH. Now retired, but as busy as he was before he became a volunteer, George is convinced that getting involved with PHWFF was about the best and most important thing that has ever happened to him. When asked why he spends so much time working with PHWFF, his response is “I’ll stop the day I don’t get a whole lot more out of it than I could ever give to it. I’ll never be able to repay what it has given me.” Alen Baker – Inducted in the Ambassador category for his leadership and commitment as the creator of the Fly Fishing Museum of Southern Appalachians and the Appalachian Rivers Aquariums in Bryson City, as a fly fishing author, as an avid fly fisher and for his service and commitment to public service with NC Wildlife Federation and Trout Unlimited. Alen is a member of the NC State Computer Science Hall of Fame and Southern Trout Magazine Legends of the Fly Hall of Fame.

Bob Nanney – Inducted in the Ambassador category for his leadership and commitment to fly fishing and the museum. Bob was recognized in 2018 for his many hours of dedication to promoting the museum at Fly Fishing Shows, museum fund raising, museum activities and extensive exhibit work. He has been declared the first recipient in this category.

Joe Brooks – Inducted posthumously in the Communications category as the author of numerous fly fishing publications, for trail blazing saltwater fly fishing and for the Blonde series of fly patterns.

Michael R. “Squeak” Smith – Inducted in the Conservation category for his years of dedication to stream restoration and being an “addicted” life-long fly fisher, a “full time volunteer”, a highly recognized and outstanding conservation leader and a “hands-on” environmentalist.

James Douglas “Jim” Estes – Inducted in the Crafts category as an amateur fly tier who is widely recognized for the creativity and wisdom in designing the mop fly. Orvis, Umpqua and many other fly pattern suppliers have all developed version of the Estes Mop Fly.

George Gaines – Inducted in the Humanity category for his many contributions to fly fishing as a dedicated fly fishing volunteer, program developer, sponsor and leader of Project Healing Waters Fly Fishing.

Dave Whitlock – Inducted in the Recreation category for his many contributions to fly fishing as a conservationist, innovator, fly fisher, fly tier, writer and artist. Dave is a member of the National Fresh Water Hall of Fame, the Trout Hall of Fame, the Catskill Fly Fishing Center and Museum Hall of Fame and the Arkansas Game & Fish Hall of Fame.

*** Soft Opening of the Museum’s Appalachian Rivers Aquarium at 4PM ***

The inductions will be held in Bryson City with Museum supporters as well as the family and friends of our inductees in attendance. Fly anglers from across the southeast will celebrate the Fourth Annual Museum Hall of Fame Inductions. With limited space, advanced reservations are essential and are currently being taken. The ticket price of $35 per person includes admission to the induction ceremony, lunch, admission to the Fly Fishing Museum of the Southern Appalachians and the aquariums. Access the museum website: www.flyfishingmuseum.org to register and pay via PayPal or E-mail info@greatsmokies.com or call 828-488-3681 to reserve your place.

Casting Carolinas and the Fly Fishing Museum of the Southern Appalachians invite all Museum Hall of Fame attendees to drop in at the Nantahala Brewery in downtown Bryson City on March 29th at 7 pm for a Pre-Event Party and Fund Raiser.

This is an opportunity to meet and greet the MHOF Inductee and past Legends, other members of the MHOF and help raise funds for Casting Carolinas, a non-profit organization that utilizes fly fishing as a means of helping women deal with and recover from various cancers.

Each Inductee will have a selected beer renamed after them during the party. Nantahala Brewery is generously donating $1 per renamed beer sold at the party. Please come celebrate our fly fishing heritage together and meet each Museum Hall of Fame Inductee and friends while enjoying some time at Nantahala Brewery.

For 2020 nominations, the Museum Hall of Fame nomination forms may be obtained from the museum website at https://flyfishingmuseum.org/HOF-nominations.html or picked up as hard copy at the museum. The Museum seeks to recognize those who have made outstanding and unique contributions to the art, science and sport of fly fishing. We encourage you to nominate those who meet the nomination criteria and are deserving of such recognition. Once nominated, the candidate remains in nomination for current and future consideration. 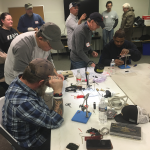 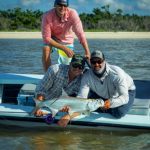 PHWFF Champions Brian and Colby Trow featured on Silver Kings this Sunday on the Discovery channelAnnouncements, In The News