It was over ten years ago that while I was walking my dogs, I received a call from a gentleman with a very pronounced southern drawl. Introducing himself as John Bass, he went on to say that he was an ardent fly fisher, not-withstanding the fact that he had been a quadriplegic, confined to a chair, since he was 24 years old. After telling his story, he got to the point, saying he had learned of Project Healing Waters Fly Fishing (PHWFF) and wanted to help. That conversation was the start of a quite remarkable collaboration and a very close personal friendship. In enlisting John’s support, I didn’t know at the time just how incredible the following years would define what John lived to accomplish for PHWFF, and for the many individual participants and families whose lives he touched. His first effort was a trip from North Carolina to Walter Reed Army Medical Center where he talked to the recovering servicemen and women and encouraged them to think beyond their injuries and accept, like he had, the realities of their new condition, and move on.

Within a short period of time, John became one of our Program Leads, a Regional Coordinator, and ultimately a member of our Board of Trustees. Always looking for ways to help bring the healing properties of PHWFF to as many wounded and disabled active service and veterans alike, John was not one to quibble and could always be counted upon to say things straight out. Along with his Project duties, he became an incredible personal mentor to many of our participants and their families. Even now I’m not really sure how many lives he touched and helped through adversarial times. I know many by name, but not all. He never made a point of having a spotlight shine on him.

He was an incredible man, a dear friend to me and my wife, and his loss leaves us so grateful for that long-ago call he made. “Captain, this is John Bass calling.  I want to help”.

The Patriot Award was presented to John by retired Navy Captain Ed Nicholson, President Emeritus and Founder of PHWFF, in appreciation of his personal dedication and commitment to the rehabilitation of our wounded active duty service men and women, and disabled veterans.

An avid fly fisherman, Mr. Bass was injured in 1974, in a diving accident that left him paralyzed. Subsequently, through perseverance and incredible determination, John was able to use adaptive techniques to allow him to fly fish again. Since his involvement with PHWFF, he has mentored, motivated, and supported wounded warriors and disabled veterans participating in PHWFF’s fly fishing activities. Through his unselfish and caring actions, he has served as an inspiration to all volunteers associated with our program. 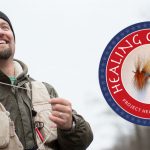 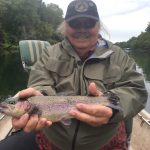