We are pleased to announce that renowned angler and fly-tier Kelly Galloup will be a special guest at The 3rd Annual Smoky Mountain Grand Slam Challenge! The 3rd Annual Smoky Mountain Grand Slam Challenge will be held September 2-3, 2016 in, and around, Knoxville, TN to raise funds and awareness of Project Healing Waters Fly Fishing and the injured and disabled veterans we serve. A fundraising banquet will precede Saturday’s fishing tournament and will be held on Friday, September 2, 2016 from 6pm to 9pm at the Foundry on the Fair in Knoxville, TN.

Kelly started his fly fishing career at the age of 13, tying flies for the local tackle shop. He started guiding at the age of 16 and still manages to run a couple trips a year. Kelly owned and operated The Troutsman fly shop and guide service in Northern Michigan for 20 years. He sold the Troutsman in 2001, and purchased The Slide Inn lodge on the banks of the Madison River in southwest Montana. Kelly has written two books:  Modern Streamers for Trophy Trout and Cripples and Spinners, and has numerous DVD’s on tying and fishing. In 2003 Kelly received the living legend award from the FFF, and was awarded the Charles E Brooks memorial life award in 2007. He has over fifty nationally recognized fly patterns that are sold worldwide, and is currently a signature tier for Montana Fly Company. He is also a rod and line designer for St Croix rods and Airflo fly lines. Kelly has been published in every major fly fishing periodical in the U.S., and is one of the Editors at large for Fly Fisherman magazine. Kelly is also the host of Fly Fish TV with Kelly Galloup . As one of the most sought after speakers in the country, Kelly spends much of his winter months speaking for clubs and Sports shows across the country.
This is the third year for the Smoky Mountain Grand Slam Challenge which is kicking off Friday, September 2nd, 2016 with a fundraising banquet and silent auction starting at 6:00 P.M. at the Foundry on the Fair in Knoxville followed Saturday morning with a fly fishing tournament at the Clinch River-Miller’s Island.  The Tennessee Valley Program of Project Healing Waters knows how to do things right and we expect another fun evening with our friends and community partners.  Come experience some true southern hospitality and help raise money for our veterans at the same time. 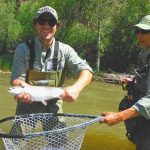 Veterans, Celebrities and Fly Fishers to Compete at The 6th Annual Battle at BoxwoodAnnouncements 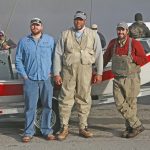 Enjoy southern hospitality at its best and support the veterans we serve on September 2, 2016Announcements