The Fayetteville PHWFF Program completed yet another rendition of the Marabou Madness Fly-tying event for the North Carolina Region on March 18-19, 2016 at the Pechmann Fishing Education Center in Fayetteville, North Carolina. This year’s event hosted more than 75 of the region’s participants, volunteers and supporters for variety of fly-fishing activities, fellowship, and fun with special guest legendary fly angler, Jack Dennis

The event kicked off on Friday, March 18th with some of the visiting participants taking a tour of Fayetteville and Fort Bragg.  At the request of some the veterans, the Fayetteville program arranged a visit to the Airborne and Special Operations Museum, many of whom were stationed at Fort Bragg or with airborne units during their time in service.  After a relaxing lunch at the restaurant, Latitude 35, the continued with a driving tour of Fort Bragg and a visit to the 82nd Airborne Museum and Warrior Transition Battalion. Afterwards, guest tier, Jack Dennis took the microphone to lead the participants through the Chernobyl Ant, Wooly Bugger, and Lime Trude. In addition to the tying instruction, Jack entertained the group with his insight into the history of fly-fishing and with wonderful stories about fly-fishing icons like Lee & Joan Wullff, Curt Gowdy, Joe Brooks, and Mel Krieger.

Jersey Mike’s provided the event with a filling lunch of sub sandwiches and then some of the participants began making their way to the Pechmann Center’s ponds which were stocked with some pretty respectable sized trout. Participants were permitted to keep some of their catch as part of the fish out in advance of warm weather. Many found their fishing success and another way to enjoy the event. After lunch, Daniel Seaman of Bug Wild Fly Company gave a fabulous demonstration of spinning deer hair that entertained and gave valuable tips to the participants thinking of trying their hand at creating deer hair bugs. Daniel’s work can be seen at Frankenfly.com. Then, Jack Dennis continued with tying, stories, and sign books and posters that he so generously gave to each participant and volunteer.

To wrap up the event, Mission BBQ provided the veterans with a wonderful meal of brisket, chicken, green beans, mac & cheese, and cornbread. The Fayetteville program along Deputy Regional Coordinator, Pat Curley closed the evening by recognizing the volunteers, and sponsors who helped make this event possible. They also presented the program Volunteer of the Year Award to Ritchie Shiver for all of his fundraising efforts in the lead up to the Marabou Madness event. The Fayetteville program also presented program lead, Tom Carpenter with special piece of art created by the Dead Weight Fly Company in appreciation of his service to the program.  Saving the best for last the program presented guest tier, Jack Dennis with a print that had been signed by all of the participants of the Marabou Madness event. 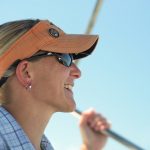 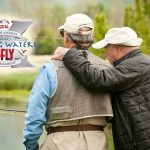