New York City served as the capital of the United States from 1785 until 1790 and has been the largest city in the nation since 1790. Throughout the city’s long history it has embraced, and celebrated, our nation’s military and its veterans: from Fort Hamilton, one of America’s longest serving military forts, to over 270 war memorials city-wide to the powerful embrace residents showed service men and women during, and after, overseas conflicts. New York City has an inspiring and unwavering patriotism in support for our nations ideals and those individuals who serve, and sacrifice, to defend its virtues.

This was particularly evident at The 3rd Annual Healing on the Fly event held on October 4, 2016 at The Loeb Boathouse in Central Park.  Bringing together New Yorkers, veterans, anglers, and advocates it was an evening in support of the thousands of disabled veterans served each year across the United States by Project Healing Waters Fly Fishing (PHWFF).

This annual event was co-chaired by two great PHWFF supporters and champions: Commissioner of Major League Soccer, Don Garber and Businessman Bob Rich.  Thanks to their leadership, a special evening took shape in the heart of patriotic New York City. “Two loves that I have are for my country and our sport of fly fishing.  I believe so much in this program.” – Don Garber, Commissioner Major League Soccer and Event Co-Chair The evening began with a powerful rendition of the “Star Spangled Banner” by renowned tenor and patriot Daniel Rodriguez.  Mr. Rodriguez became known as “The Singing Policeman” in his former work with the New York City Police Department due to his role as one of the department’s designated National Anthem singers. In the aftermath of the September 11 terrorist attacks, he received widespread attention with his rendition of “God Bless America”, which he sang at memorial events. Shortly afterwards, PHWFF Founder and President Ed Nicholson shared the origins, vision, and impact of this top-tier veterans program operating in over 200 locations nationwide.  With thousands of volunteers passionately dedicated to fulfilling the mission of PHWFF, Mr. Nicholson stressed the importance, and impact, such selfless acts can have upon the lives of those who have sacrificed for our nation, he remarked, “Volunteers have ensured the success of our program over the past 11 years.  It is through their work, and dedication to our cause, that we have brought our unique form of therapy to thousands of injured and disabled veterans nationwide”

Poignantly, two veterans addressed those assembled – sharing their journeys and the impact PHWFF has continued to play in their lives.   U.S. Navy veteran Andrew Laffey, who severely injured both hips while serving aboard the USS San Jacinto, spoke passionately about his path to recovery and the powerful role that PHWFF played. “I did little beyond the monotony of physical therapy until I joined PHWFF (in 2013).  Through my participation, my physical and mental healing truly began.  PHWFF enabled me to dig deep, push on, and succeed.  Because of the program, I was able to make the transition back.”

As the newly appointed Chief Executive Officer for PHWFF, Colonel (ret) Todd Desgrosseilliers,  path has led to his continued leadership and veteran advocacy through PHWFF.  Following a long and distinguished career in the United States Marine Corps, Todd found himself recovering from wounds suffered during combat in 2004-2007 while deployed in Fallujah.  “As I struggled to deal with the effects of my wounds and the war over the past decade their symptoms progressively got worse – requiring extensive physical therapy and recently culminated in my medical retirement after 31 years as a U.S. Marine.  Fortunately, in April 2015, during a physical therapy appointment, my vision therapist recommended fly fishing as an option to my clinical regimen.  That’s how I got connected to Project Healing Waters. It was the best thing I did to start to accept and to try to recover from my physical and emotional injuries.”

During this process, he found his vocation and his calling: “To find ourselves – sometimes, we have to first lose ourselves. That – maintaining our character, our integrity and our moral compass is about confronting our injuries with integrity and overcoming them as challenges. We have to give to receive. Sometimes – we have to surrender to something outside ourselves to gain strength within….”

PHWFF brought life full-circle for him.  “That’s the magic of Ed Nicholson’s vision.  I’m really honored for the opportunity to continue to serve our veterans as Project Healing Waters Chief Executive Officer.” As Daniel Rodriguez concluded the evening with a beautiful rendition of “God Bless America” it was clear that all in attendance felt the gravity and power of his words.  New York City stood beside the veterans served by PHWFF through the night with the light from above. 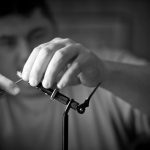 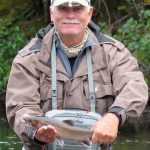