We enjoy our freedoms because of all those who answered the call to service. You can help as we strive to serve those who have made great sacrifices in the service of our Nation.

We are thrilled to share a small selection of incredible patriotic fly patterns that celebrate our great Nation below. Have you tied a Patriotic Fly honoring America? If so, we want to see it! Just post it to social media and tag us (@PHWFF Twitter/Instagram and @ProjectHealingWaters on Facebook) and we’ll be sure to share a few of them.

On December 12, 2008 the Board of Trustees of Project Healing Waters Fly Fishing proclaimed Charlie Meck’s Patriot Fly as the symbol and signature of our organization, saluting the warriors’ sacrifice and honoring their goal to overcome injury. We steadfastly resolved to use the Patriot Fly to signify our dedication to the men and women of the active services and veterans rehabilitating their wounds. Created by world renown fly-tier Pat Cohen for Project Healing Waters Fly Fishing, the Bald Eagle has been the national emblem of the United States since 1782 and a spiritual symbol for native people for far longer than that. The “September Sky” fly was tied by Dr. Chuck Moxley to honor the nearly 3,000 lives lost on September 11, 2001 and those families who carry on their legacy.  Dr. Moxley tied the first “September Sky” for Dick Cheney immediately after 9/11 and tied this one specifically for our cause. It currently resides in the American Museum of Fly Fishing in Manchester, VT as the center-piece to a Campaign Ribbon Fly Plate created by the Olympic Peninsula Fly Fishers for Project Healing Waters Fly Fishing.  The project was headed up by our great friend and supporter John Gort who arranged for various members to create their interpretations of theater ribbons and medals.  This beautiful and patriotic art was produced to honor those who served and sacrificed for our country. This series of streamer flies was tied by Carrie Stevens, a self-taught fly tier from Maine, who created these patterns during World War II. The fly was graciously tied by Tom Herr and was presented to the parents of Jason Dunham at a Project Healing Waters Fly Fishing, Inc. event in 2012.  Jason was a Corporal in the United States Marine Corps who was awarded the Medal of Honor while serving with 3rd Battalion 7th Marines during the Iraq War. Bob Popovics is a United States Marine (ret) and the founder of the Atlantic Salmon Saltwater Fly Rodders, advisory member of TFO rods, a member of the Renzetti Legacy Tying Team, associated with Tibor Reels and a Freshwater Fishing Hall of Fame and Catskill Fly Fishing Museum Hall of Fame inductee. Though he has refined his fishing techniques and casting skills by traveling around the world, Bob is perhaps best known as a designer of lies (or ”fleyes,” as they’re called) and as a teacher.  This one-of-a-kind fly was tied exclusively for Project Healing Waters Fly Fishing. The Red White and Blue Intruder

This one-of-a-kind intruder style fly was tied exclusively for Project Healing Waters Fly Fishing by world renown fly tier Greg Senyo.  “If you tie streamers—heck if you tie anything—then you probably know the name Greg Senyo, which appears on a variety of products with a number of companies: Lazer Dub, Shaggy Dub, Predator Wrap, Articulated Shanks. And that’s just a short list.  Steelheaders know him for his swing patterns, which are spectacular in the true sense of the word: they are a spectacle, a visual trick-and-treat for the eyes, be they of the human or fish varieties.” (midcurrent.com). Have you tied a Patriotic Fly honoring America? If so, we want to see it! Just tag us on social media (@PHWFF Twitter/Instagram and @ProjectHealingWaters on Facebook) and we’ll be sure to share a few of them.. 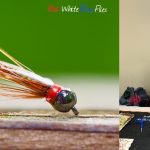 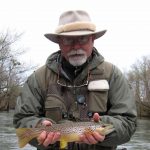 Hank Pitcher Recognized for his Exceptional LeadershipAnnouncements, In The News, National Capital, Regional