RICHARD NEEDS TO BE HERE TOO

Richard is a Man of Faith. And when he served, he was a Warrior. A man who saw the ugliest,  the worst parts of war and combat, over and over, and survived it, now lives with it.

Richard is also a striking looking man. He’s six foot four, has a long, salt and pepper beard down  to his chest. His size, deep voice, and serious demeanor hide the fact that he really is a gentle man  who’s found a lot of support in his faith and belief in his Father. We’ve talked about that more  than once and I’ve always admired him for that.

I met Richard on one of those many phone calls I get from folks interested in our Program. He  had been introduced to Project Healing Waters when he was undergoing treatments at Walter  Reed Hospital. When he was getting ready to leave after completion of his treatment, the  PHWFF folks he’d met there told him he should call me when he got home to Virginia Beach  and connect with our local Program. So he did. He told me how much he enjoyed fly fishing and  how he’d grown up fishing and hunting in West Virginia. He sounded like another perfect match  for who we are and what we do.

Richard’s first meeting at our Program was very memorable. He walked in and the minute he  spoke I recognized him from his voice. He covered most of the door space when he walked  through it and asked if he was in the right place. I assured him he was. As soon as I introduced  him to the rest of the folks, everyone started in with the typical Service/Veteran banter that  always goes on in a group like this. That particular day, the questions and the good-natured banter were being led by David, a retired Army Sargeant Major, who’s what I call a “five by  five”. Barely over five feet tall and getting too close to five feet wide if he’s not careful. “Did you  serve?” “Yes”. “What Branch?” “Navy.” “What did you do?” “Special Forces.” “Oh, a Snake  Eater, huh?” The banter went back and forth like that and started to get pretty rich when I  decided to join in. “Wait a minute folks” I said. “Do you realize this man could kill you with a  table napkin?” They stopped dead in their tracks, even David. Somebody said, “Oh Yeah, that’s  right” and the banter started right back up. Richard had been accepted by the group.

We went on several local fishing trips together, gradually branching out as Richard’s skills  improved. He loved the fishing and never got tired of telling me about his family, especially his  son and daughter, and how they practiced their faith together. I was impressed with how well  Richard had come back from some awful combat experiences, the loss of Teammates and  Comrades, and seemed to have acclimated to civilian life without too many noticeable scars,  especially the emotional ones. He just avoided talking about has service experience and given  the nature of what he did, I accepted that and just enjoyed whatever he would share.

We even got to go to Montana to fish some great streams together and meet some wonderful  people who support what we do. I knew that was a special trip because on the last night, after  we’d had dinner with our guides, taken our last group pictures, and started heading towards our rooms for the evening, I looked out across that big Montana landscape towards the  mountains. I remember knowing then why they call Montana ‘Big Sky Country’ as a full rainbow  settled right in the middle of my view. It was perfect and just one more time I was grateful I get  the chance to do this and get to know people like Richard.

A while later Richard fell off the radar. I reached out to him, and he told me he and his wife  were having some troubles and that he’d decided to go back to West Virginia for a while to live  in his cabin. Later I found out he’d actually been living in his truck, a big old duallie, that still  isn’t big enough to fit a man his size and was really struggling emotionally with the loss of time  with his children and his wife. Like many in his former line of work, he chose to stuff all those  emotions, to lock them away somewhere, and not talk about them, even though on the rare  occasions we would talk over the phone I would ask him if he was getting any help.

Finally, I got worried about him enough that I reached out to my good friend Bubba not too far  from Richard there in West Virginia. I told Bubba how worried I was for Richard and asked him  if he would contact him. Like I knew he would, Bubba had Richard planning fishing trips and  going to PHWFF Program events that very day. I was relieved.

I stayed in touch with Richard as much as I could by phone. At some point, the darkness that  was becoming so much a part of him seemed to lift a little. At least to the point where he  started to share some things with me. He told me he had tried to end it all. Obviously, he had  not been successful, and I was immensely glad about that. I was still very fearful he might try  again. I asked him if he would be willing to tell me his story. This is what he said:

“It wasn’t all the memories that finally brought me to the point I wanted to end it all. It was all  the pain and suffering I was going through because of my marriage. I still love my wife, and  really missed my time with my children, and I just came to believe I couldn’t do it anymore.

I decided to go down to Pungo Ferry and do it there because I knew it was far away from crowds  and I wouldn’t disturb anyone. And the whole time I was making the decision to do it I kept  saying ‘I just can’t do this anymore Father and I believe this is what I am supposed to do. If it  isn’t please give me a sign.’ That whole day I just kept asking my Father to give me a sign.

I went down to Pungo Ferry at four in the morning after several days of not sleeping. I had no  idea that the city had bought the property and had turned it into a boat launch. I was  completely surprised to find it swamped with people launching their boats to get out before  sunup and do some fishing. The place was packed. My plans were foiled for the next couple of  hours so I just kept asking my Father for a sign. Should I do this or not? After the boat launch  finally cleared I got back in my truck and looked for a quiet parking spot to do what I’d come to  do. About that time a Game Warden came along. He recognized me and my truck from the past  when he’d given me a ticket for some minor thing. He drove up to me, asked me how I was  doing, and then just started talking to me about fishing and hunting. We talked for nearly two  hours before he said he needed to take off and look like he was working. By that time, the boat launch was crowded again so I had to wait. I think I may have asked my Father for a sign at  least one more time during all of this.

Finally, late in the afternoon, the place cleared out. I backed my truck into a spot that was out of  sight and made the decision to go ahead and do it. In my mind my Father hadn’t sent me the  sign I needed to tell me not to yet so I put the gun to my head. Just as I did that, lightning struck  the ground 20 yards away from me. It scared the hell out of me, drew my attention towards it,  and blinded me from the flash. All I could see was what I call a welder’s flash of green and every  hair on my body was sticking straight out.”

At this point in Richard’s story, I had to stop him. “Are you telling me you didn’t recognize any  of the signs your Father was sending you all day long? The crowd at the boat launch, the Game  Warden, the second crowd, and then the bolt of lightning?” What more of a sign do you want  Brother?” Richard smiled that slow, knowing smile of his and continued.

“I don’t know why but I hadn’t recognized any of these things as a sign. In fact, I wasn’t even  sure that the lightning bolt was from my Father. So I stuck the gun to my head a second time  and just then, a Team Mate showed up and told me I wasn’t going to do that today. I had  forgotten I’d written a suicide note and left it with my soon-to-be ex-wife. She had contacted my  ‘network’ and at least a dozen Team Mates were all over the city looking for me.

At that point I finally realized my Father didn’t want me to take my own life. And I’m completely convinced of that now.”

And so am I. You can imagine the goose bumps on top of goose bumps that were all over me as  I listened to Richard tell his story. And we both had tears in our eyes.

I’m so grateful Richard wasn’t successful. I’m even more grateful he blessed me with his story.  And I’m convinced that indeed, his Father didn’t intend for him to die that day. I’m convinced  that Richard, like Walter, and so many men and women I’ve met these days doing what I do,  have stories to tell that just may help someone decide they’re worth living. They’re worth not  ending it all and indeed, they have something to give to themselves, their families, and all of us.  Something very special.

Richard needs to be here too. We all need to push through the discomfort, maybe the fear, and  certainly our own experiences to listen to Richard’s story and all those like it. We need to be  there for the Richards, the Walters, and the Janes, in our lives. I’m convinced without a doubt  that doing that makes me a better person and helps me heal just as much as it does them.  Thank you, Richard.

Richard is still struggling with his demons, with the hand life has given him now, but he’s  convinced his Father doesn’t want him to take his own life. The last time I talked to him, he told  me he’s spending the summer with his daughter, spending as much time with her as he can by the pool and doing what they enjoy most. He knows that many life issues take time to resolve  themselves so he’s working on accepting that.

I can tell you he seems to forget all these issues when he’s on the stream. At least from the  outside but, then again, Richard is a perfect example that many of our wounds are not visible.  My prayer for him is that he finds the help he needs in time, uses the peace and the distraction we offer him through fishing events and is able to come out the other side the man I know he  already is. He just needs to realize it and embrace it himself. 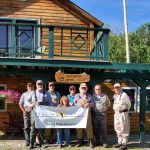 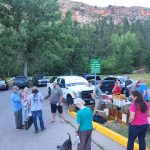