We’re excited to share a video from Outside TV featuring world-renown fly angler Oliver White and SSG (ret) Wesley Hodges, U.S. Army.  Both Oliver and Wesley are longtime members of the PHWFF family and its a thrill to see them sharing their passion for fly fishing on this epic trip.

“When two fishermen, Oliver White and Wesley Hodges, have a burning passion for fishing and meet through a non-profit called Project Healing Waters, it’s only a matter of time before they go on an epic fishing trip together. And thanks to Oliver, Wesley finds himself saltwater fly fishing in Southern Louisiana for the first time ever.” – Outside TV

Oliver White is a fly fisherman of great renown.  Oliver has long supported our cause through his tutelage, inspiration, and by hosting numerous PHWFF destination trips his Bahamanian lodge in South Andros: Abaco Lodge.

In his own words: “Simply put, I’m a fisherman. It’s the most natural outcome for someone who fell in love with fishing early. And by love, I mean: willing to follow wherever fishing wanted to take me. Travel to a new country to investigate a fishery? I’ll be packed in an hour. Explore an uncharted river? I’m in. Stalk a fish that’s never seen a fisherman? I want to solve the puzzle, crack into that animal’s head and figure out how to catch it. After years of living in fishing’s gravity, I’ve witnessed how it can alter orbits beyond my own. I’ve seen how it changes the angler, how connecting to wild fish in unspoiled landscapes affects each and every one of us. Whatever distractions complicate our lives evaporate under the influence of profound waters and untamed fish. I’ve also observed how angling can impact communities, offering new strategies to protect indigenous homelands. The simple act of fishing provides people with deep connections to rivers long-term hope and protection against forces that tempt them with short-term gain.  Being an angler requires one thing above all else: to remain open to endless possibility.  That’s all it takes for fishing to work its magic. It certainly did for me.”

SSG (ret) Wesley Hodges, U.S. Army is a former PHWFF participant, current PHWFF volunteer, a former member of the PHWFF Veteran’s Advisory Council, and a graduate of Virginia Tech.  He now heads up his own Fly fishing guide service which can be found at www.wesleyhodgesflyfishing.com

In his words: “In 2002, I enlisted in the US Army and volunteered for the 82 nd Airborne Division. For eight years, three of which were served overseas, I served with the finestmilitary personnel imaginable. In the spring of 2010, I was medically discharged from the military due to injuries sustained while on active duty. Shortly thereafter, I found myself fishing the chalk streams of PA with Project Healing Waters. It was through PHWFF that I began to focus on my future rather than my past. This led me to VA Tech where I studied smallmouth bass and muskie. In the fall of 2013, I graduated with a degree in International Relations and Spanish. Due to my passion for fly-fishing I started my own company, Bearded Lady Fly Fishing, immediately upon my departure from my studies. I could not have accomplished this new endeavor without the mentoring and support from PHWFF. This organization, its founder, and the volunteers will always be the example that I will strive to follow when providing my services to the fly-fishing community.” 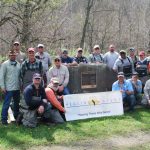 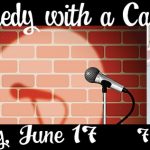 Indian Head Center for the Arts to host “Comedy with a Cause” on June 17National Capital, Regional, Virginia