The Smith River Float trip turned out to be one of the best personal experiences I could have ever been a part of. There was a beautiful sense of peace throughout the entire trip. Imagine yourself in the middle of nature, secluded from any form of today’s technology for 5 days and not finding yourself doing some inner soul searching. That is where I was.

There were 6 of us participants, 5 guides – (to include Mike Geary, our trip hostand owner of Healing Waters Lodge) and then 2 extremely hard working individuals that floated the freight rafts, set up camp, cooked and did anything else you could possible imagine to make our trip as grand as it could be. They went non-stop from sunup to sundown.

On 6 May, we enjoyed breakfast at the Healing Water Lodge before the long drive to Camp Baker to launch for our 5-day float down the Smith River. Fishing started out (and remained) very tough because the river had blown-out due to high temperatures in the mountains which caused melted snow and with that drastic changes to the water temperature. The water resembled watery chocolate milk.

In our raft, Beth Steinberger caught our fish of the day, which was exciting for all three of us in the raft. At one point, Jeff, our guide, stopped at a “natural spring” and filled his water bottle. It was beautiful to witness. The scenery made it easy to forget that the fish were not biting. I was able to work on my cast from the raft and enjoy all of the beauty around me.

One day, I was guided by Mike Geary, this was my success day. I caught two very beautiful brown trout. Mike was such a patient and informative guide. I really learned a lot from him about my cast, where the fish would likely be, and patience. I enjoyed every minute with him.

The final float day had a feeling of sadness that crept over it. It was a short float, the fish still were not biting, the scenery changed tremendously, (the canyons were gone), and we knew it was over. When we arrived at Eden Bridge on day 5, we had traveled 59 miles on the Smith River. What an accomplishment. This trip had not been a trip of “roughing it”; it had been a trip of pure pleasure and enjoyment.

My fellow participants were all awesome, each in his/her own way. We came from all over;  Walter Reed, Indiana, West Virginia, Alaska, and Colorado. I am so very pleased to have met each and every one of them. Everyone has agreed that we would all like to return to Montana and float the Smith River again. It was absolutely breathtaking. My Smith River fishing trip was from May 6th through May 10th with Lewis & Clark Expeditions through Healing Waters Lodge in Twin Bridges, Montana. We launched at Camp Baker and the take out was 59 river miles at the Eden Bridge. Floating in rafts for five days and camping for three nights and one night hosted at a local family’s fishing camp was a trip to remember. The catch was split between rainbow, brown trout with the occasional white fish all caught with San Juan Worm’s with a trailing stonefly. The white fish is the only native fish on the river. The fishing was slow due to the snow melt causing high muddy conditions and cooler water temperatures.

Mike, the owner, lead this trip along with three other guides.  This is the only trip he has time for because his duties at the lodge keep him occupied during the fishing season. It was Jeff’s first trip guiding and just another season in Brian’s 30 year career.  Peter was taking a break from work before starting medical school and just guiding this trip with his father.  We were the first trip of the season for Lewis & Clark Expeditions and it was interesting to watch the guides work out how they were going to operate for the rest of the season. The details included how and where to set up the camp, identifying missing or broken items and preparation of the meals. Each day included fresh fruits and vegetables; full breakfasts and lunches. For dinner it was soups and salads along with entrees including pork, chicken and beef. This was not roughing it.

The other participants included Lee Barbee, Beth Steinberger, Pamela Wright and Matthew Hoalcraft all from the Walter Reed medical center and Son Tao, currently stationed in Indiana.   You can view Son’s incredible tying skills and on Instagram- http://exonline.pw/user/son_tao . Meeting all the participants on this historic river was an enriching experience. For me the entire trip was a highlight. Catching a nice wild brown was the best along with comradery.

This trip helped renew my some faith in humanity. You see, nature for me is the beautiful part. People for me can cause chaos. The comradery on this trip was great. I felt part of a team again. I also got to see the pristine nature the Smith River offers. The quietness and beauty was surely relaxing. It’s hard to beat a trip like this. Thank you PHWFF for sending me.

Mike Geary the owner, and all of his staff were top notch. Not pushy or over bearing. Very relaxed and comfortable lodging, fishing, and camping experience. I would travel and use his accommodations on my own with my family. Very impressed. Montana was an amazing experience and I can’t wait to visit again. I made connections and friendships with fellow fishermen as well as guides and staff. Great trip.

I enjoyed the overall beauty of the float trip and the amazing hard work of Mike Geary’s team. I also enjoyed learning more about other PHWFF programs and made great friends

We had a great group of guides and gear hands who made our trip an amazing adventure, which was augmented by the mesmerizing scenery. The food they cooked on a camp stove under a canvas tent out of coolers, would make many 4 star restaurants envious. I think we, the PHW participants not only enjoyed being on the water, learning from our guides, either one or 2 participants to a guide a day, but we also enjoyed feeling useful and helping out with camp in doing dishes after meals, and breaking down tents in the morning. 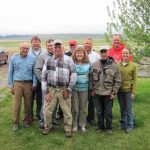 Beartooth Flyfishing trip on the Madison RiverAnnouncements, In The News, Virginia, West Virginia 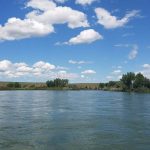