The Brian I Knew

Brian Mancini was a beloved member of the Project Healing Waters Fly Fishing family who passed away on March 6, 2017.  He will be deeply missed.  Remembering SFC Brian Mancini, U.S. Army (ret)

His funeral service was held on Tuesday, March 14, 2017 at Christ Church of the Valley in Peoria, AZ.  Below is a remembrance and tribute offered at the service:

My name is Ed Nicholson, Founder and President of Project Healing Waters Fly Fishing.  I spent my career in the Navy.

With so many friends of Brian here today, all of whom would be able to relate their own remembrances and tribute to Brian, I feel most honored and humbled to have been asked by his family to speak.

I first knew Brian in 2008, when he was recovering at Walter Reed Army Medical Center, as a patient in the Occupational Therapy Clinic.  Project Healing Waters had been helping in the recovery of patients there since 2005 and I would, along with other volunteers, go there every week to teach fly fishing.  Brian joined the group, and as was the case, never having fly fished, was invited to an annual 2-Fly Tournament at Rose River Farm to observe what fly fishing was all about.  The timing was such that he would not actually be part of the competition but, when the competition was over, Brian had had enough “watching”, grabbed a fly rod, and with a little fly fishing help, descended into the Gazebo Pool.  It was dark before we could finally, physically, get Brian out the water.  Fly fishing had hooked him good.  I might add that this very pool, the most popular pool on Rose River, Project Healing Waters’ Home Waters, is to be renamed for Brian at this year’s 2-Fly, and a plaque, with a quote from one of his poems, fixed to a granite stone from the Blue Ridge Mountains, to hold his name there for all time.

From that moment at Rose River a committed fly fisher, and recognizing the restorative powers of our project, Brian became an enthusiastic participant and, in short order, began volunteering and helping me recruit and teach at Walter Reed.  He was a natural at this – articulate, persuasive, and a compelling advocate and mentor for other recovering service men and women.  As we worked together, a deep friendship developed between us.  It also became evident that his attachment to Project Healing Waters did not limit his true and passionate commitment to further helping, by other means, individuals who had been scarred by the wars, past and present.  Brian was an idea man, and he had decided that there must be some way that he, personally, could reach out and help those struggling with the trials associated with recovery – the unresponsive healthcare systems, the over-reliance on medications, and the failure of many to be able to successfully obtain a job, to name but a few challenges, and re-integrate back into society.  In addition to fly fishing, he was attracted to other non-traditional forms of rehabilitating therapies – yoga, meditation, and other outdoor recreational activities.

Brian and I spent many hours discussing these important issues, oftentimes on fishing outings that took us, and our mutual friends, to wonderful fly fishing locations, on picturesque waters, made even more special by the shared camaraderie of fellow volunteer fly fishers and participant veterans.

It was difficult for all of us on the East Coast to see Brian depart and return to Phoenix, but we knew he would continue in his efforts to touch and help disabled veterans.  His founding of Honor House further exemplifies the care and commitment he personally attached to improving the lives of his fellow comrades, standing as a remarkable achievement and testament to his respect and admiration for our country’s disabled service men and women.  He gave all of himself and then some.  His work on behalf of his service brothers and sisters epitomizes all that is noble and good.  He will always be remembered and held in the highest esteem by me and his many friends.

Brian’s family have established a Go Fund Me campaign to aide with expenses during this difficult time. Visit it at https://www.gofundme.com/brian-mancini 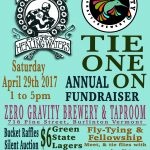