The Inaugural partnership with the Norwegian Veterans Administrations – International Operations (NVIO) and Project Healing Waters was conducted in June 2017.  Three PHWFF Ambassadors; Chris Jackson, Jim Kuhns, and Diego Neal were selected to represent our organization on the fabled Alta River during the famed Atlantic Salmon season opening.  This experience was the brain-child of dedicated PHWFF volunteer Oivind “O” Moldestad and was made possible through his hard work in orchestrating all aspects of the partnership. On Sunday the Participants started their journey to Norway with the first leg of a long flight which would land them at the London Heathrow airport.  Shortly after they linked up and hopped a plane to Oslo, Norway.  On Monday they linked up with their Norwegian host, Lars Christian Finstad. Lars’ hospitality was a major contributing factor in the success of the experience. As travel issues arose and time tables shifted, Lars opened his home and family to our forever grateful team. The team’s first stop landed them at Forsvaret Veteran Center (FVC).  The FVC is a military operated veteran recreation site that provides accommodations and activities to Norwegian veterans. This is an outdoor recreation facility located in remote area outside of Oslo, and acts to promote physical and emotional rehabilitation after international operations. Veterans at this location can receive services to assist in transition back into Norwegian community. Here, the Ambassadors met with leadership to discuss veteran issues from both cultures. The participants of this trip were not only there for fishing.  While there they were able to see many thing such as the Norwegian WWII Resistance Monument, the Olympic Ski Jump Area and a private tour of the Tirpitz Museum.  They traveled to the Alta River Fish Camp fish on a 100+ year old vessel used to evacuate Norwegians to England during the German Occupation of WWII. After their cultural immersion into Norway’s storied past, it was time to chase the wild Atlantic salmon with their comrades from the Alta Chapter of the NVIO. Upon arrival at the river’s edge, it was evident that conditions would be challenging. With snow melt producing river levels 6-feet over normal flow, our Ambassadors were put to the test. The fishing was slow, to say the least, with Alta River locals passing up the almost 24 hours of daylight found in areas north of the Arctic Circle. During this time, our Ambassadors took to learning the skill of Spey Casting, the preferred method of fly fishing in Norway. For 3 long days, our team and their hosts were “skunked”. However, morale was high and the camaraderie was enjoyed through other forms of entertainment that included a river tour with the King’s River Guide, Helicopter Tours, and Reindeer Lasso training. One the fourth and final day along the river, our PHWFF team refused to leave empty handed. They decided to adapt and overcome by infusing Norwegian knowledge of the river and fish with a little bit of western style nymphing. The only single-handed rod was located on the fish camp with a very unconventional set-up; 7 weight, right-handed take reel with shooting line and mono-running line. It was the perfect hybrid of Norwegian Spey and Western set-up; just backwards for us right handed folks. With their equipment available, Chris Jackson (US) and Roger Hermansen (Norway) developed the “Alta Multi-Tool” and hybrid of Salmon Tube Fly and the European Stone Fly that was prevalent along the banks of the river. With a theory of finding Sea Trout as a means to find the Salmon, Chris and Roger set-off to explore the river using Roger’s traditional Alta River drift boat. For the first 3 hours, there was no luck. The river remained high and the fish were down low. At 10:00 p.m., Chris’ line finally felt a tug and the reel screamed out of control. After an aerial display, the Sea Trout were located. Roger knew the Atlantic Salmon were nearby. They let the area settle for 2 hours and headed back to the fish camp to share the news, only to find everyone had retired for the evening in order to prepare for their travels back home in less than 6 hours. Roger and Chris were able to recruit another NVIO-Alta fisherman to join in; Roger Berg. The three setout out at Midnight to end the dry streak. Not long after they set up their shore fire and established the fishing rotation, the “Alta Multi-Tool” proved its utility.  The 7 weight rod bent with fury as Chris knew this wasn’t the run of a Sea Trout. After a lengthy battle, he was awarded with a beautiful Wild Atlantic Salmon female returning to back to sea after this season’s run up the King’s river. The three comrades continued until 4:00 a.m. on the river and refused sleep as they rotated between, catching salmon and warming. Finally, the trip was complete. They had experienced the King’s River and pleasured in the bountiful Wild Atlantic Salmon. The PHWFF team is concerted in their take-away that that the river was good but the people they encountered made the experience great.

Thank you to our Brothers and Sisters from Norway! You were amazing hosts and will forever be our friends. 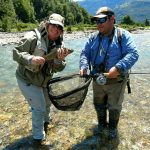 Two veterans experience the trip of a lifetime to Magic Waters PatagoniaAnnouncements, In The News 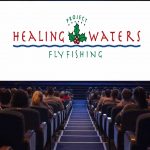 Our Favorite Videos of 2017Announcements, In The News, Regional