Join us in welcoming two new Headquarters (HQ) Staff Volunteers: Ira Strouse and Jeremy Bruns. Both Ira and Jeremy started out in PHWFF as participants – receiving the benefits of our program. Because of the impact that PHWFF has had on their lives they have had a strong desire to give back to our organization and their fellow veterans. Both Jeremy and Ira have contributed in many ways volunteering with their local programs and regions, but now we are proud to announce that both are stepping up as official volunteers at the Headquarters level.

Ira will be stepping into the role of Social Media Assistant and will be helping Dan Morgan, our Director of Communications, in the realm of our social media footprint to include Facebook, Twitter, Instagram, and other online projects and platforms.

Jeremy will be stepping into the position of Operations Assistant and will be helping David Folkerts, our Chief Operations Officer, with the National Destinations Trips program and various other special projects as assigned. Ira Strouse has been involved with Project Healing Waters Fly Fishing since 2011 after returning from a yearlong tour in Afghanistan.  In addition to being an active participant, Ira has endeavored to give back by assuming various volunteer positions within the organization at both the local, regional, and national levels.  His love of fly fishing not only is shared with other veterans and soldiers but also with his family.  His wife Tissa, an active duty Army officer, also volunteers with Project Healing Waters and both sons are cutting their teeth in the sport.

First Sergeant (Retired) Strouse grew up in Bethel, Connecticut.  After enlisting in the Army in 1990 as an Intelligence Analyst, First Sergeant Strouse went on to serve in a variety of units including the 3/325 Airborne Combat Team, 3/1st Special Forces Group (Airborne), 2nd Infantry Division, the 319th Military Intelligence Battalion (Airborne), and the 10th Mountain Division.  He has deployed to Iraq twice and Kandahar, Afghanistan once.  He has received two Bronze Star Medals, the Combat Action Badge, the Military Outstanding Volunteer Service Medal, and a range of other awards.  Now retired from the military, Ira finished a MS in Organizational Leadership and recently moved to Charlottesville, Virginia in support of His wife’s career.

As a veteran that is overcoming the physical and mental injuries of war, Ira is adamant that Project Healing Waters Fly Fishing is the greatest contributor in preventing him from being one of dismal statistics that define this era of conflict.  Fly fishing has become the cornerstone of Ira’s endeavors and he shares his enthusiasm for the sport freely.“The sport of fly fishing itself is incredibly therapeutic.  The rhythm of the water and casting stroke when combined with wild sceneries has a calming effect that is hard to describe.  If any of you have ever played a sport you know the feeling when a big play is blown.  After the game, when you are alone, you can see that play over and over in your mind’s eye.  PTSD for me is like that except my mind is always replaying a myriad of events at a thousand miles per hour.  Fly fishing put a comma in that thought process and I was able to concentrate on the task at hand rather than dwell on war.In addition to the sport is the caliber of people who make up the fly fishing community.  On one hand are the soldiers and veterans that speak a language I understand.   On the other are the volunteers and benefactors that generously give of their time and resources.  The list of people that freely shared knowledge and patiently taught me how to fish is extensive and there are several I consider mentors.  Now that I am on a much stronger foundation I try to emulate the actions and examples in an attempt to help others find joy again.” Jeremy was injured November of 2012. He was struck by an intoxicated driver speeding and on the wrong side of the road. Jeremy was about to load his fishing kayak in the back of his truck when the drunk driver struck him and continue for another 60-80 feet pinning him between the two vehicles. He was medevac’d to Duke Hospital for his initial surgeries and eventually was moved to Walter Reed where he recovered and rehabbed for two and a half years. He is a double above the knee amputee and a partial hand amputee on the right side.

Jeremy has always been an avid fisherman. Growing up in Minnesota he targeted walleye and northern pike. Stationed in North Carolina he switched to bass and crappie. Fly-fishing was an activity he picked up post injury through Project Healing Waters. A new challenge that he enjoys immensely.

For those of you attending the upcoming National Program Rendezvous on March 13-16 in Orlando, FL you’ll be given the opportunity to hear directly from them on Sunday night during the opening program as they reflect upon what PHWFF has done for them as participants and what motivates them to give back to PHWFF.  In addition to Ira and Jeremy, you’ll also hear from George Draper who has also moved from participant to volunteer in his current role as Regional Coordinator of the New England Region.

Their stories are only the tip of the iceberg in regards to the total number of volunteers in PHWFF who started out as participants in the program and are now currently serving as volunteers. Many in our organization have similar stories and that is something that we can all be proud of and point to as a great achievement and something we should all be proud of as an organization. 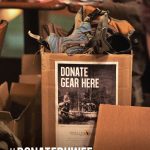 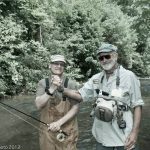