For five days in July, two veteran participants journeyed north to a remote area of New Brunswick, Canada in pursuit of wild Atlantic Salmon on the Upsalaquitch River.  Following the long road-trip, they arrived at Boland Brook Camp eager to being plying its waters.  Upon arrival, the veterans were met by two guides from the camp and immediately set about loading their gear into 22 foot river canoes for a five mile adventure upstream to the camp itself.  The Boland Brook Camp has been at its current location, and operating, since 1937, and upon their arrival they were pleasantly greeted at rivers-edge by hosts DR Livingston Parsons, JR. and his lovely wife Joan, brother David, and the incredible camp staff.

Joe and I were about to embark on a fishing adventure that truly would be once in a life time.Atlantic Salmon are highly sought after, and run annually up the Upsalaquitch River, as they have forever. In recent years the numbers have declined from a number of reasons, but are slowly recovering thru the tireless efforts of people like the Parsons, the Atlantic Salmon Federation, and conservationists. ..The river is unbelievably clear and clean, staying cool in the hot months and allowing the spectacular the chance to migrate and spawn. Wearing polarized glasses you can easily see salmon churning thru fast water, and then holding for a rest. ..On the 2nd and 3rd day of fishing Atlantic Salmon were caught by Joe and myself. We were using 7 and 8 weight rods with traditional salmon flies.  There were double hook wets with names like Black Bear Greenbutt,Green Highlander and Silver Rat. “Bombers”, ( large deer hair bodied flies with stiff hackle pale red the length), were dry fly of choice.

Highlights: Fishing on a body of water , that is fished by a select group of fishermen, two participants catching their first Atlantic Salmon. Having an entry made in a fish log, that dates back to 1937, and has recorded every fish caught at Boland Brook Camp. Being hosted by a couple of true patriotic Americans, Dr Parsons was a surgeon in the Korean War, Mrs Parsons cares as much as any person I have ever met for Veterans and their neeeds. Her honest belief is that all veterans serving now and who have served need attention and compassion.  She is an awesome fisherman, and holds many of the camp records for numbers caught, and by size. 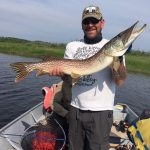 A trip of a lifetime: The 9th Annual Healing on the Albany at Wilderness NorthAnnouncements, In The News, Regional 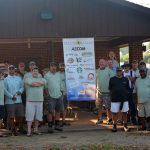 The 2nd Annual Smallmouth on the Roanoke set for September 10, 2017Regional, Virginia