They came from all over Virginia:  Tidewater, the Shenandoah Valley, the Blue Ridge, and even Northern Virginia.  They were Army, Navy, Marine Corps, and Air Force Veterans.

They came to join in a “once in a lifetime” experience:  fly fishing the waters of Montana.

Once they were settled into their lodgings a local guide provided a short reminder class on the best way to handle a fly rod on the water.  This was an excellent start since the next three days would be spent searching for the elusive trout species of Montana:  rainbows, browns, cut throat, brookies, and maybe the odd grayling.  Right from the start the competition started with Bill Harvey challenging the team to “trout grand slam”, the first person who catches all five of the species in one day.  That was the critical rule: in one day.  No carry overs.  There seemed to be no monetary award involved, but the inter-service rivalries spun up instantly.

The first day out was on the Beaverhead River about an hour south of Freedom Ranch.  Given the weather, hot, it was decided that wade fishing was more appropriate that sweating all day in chest waders.

The Beaverhead was not running very fast and the deepest parts were about thigh deep (depending on how tall one was).  The troops fished a section of the river about ½ to ¾ of a mile in length.

While some of the vets fished upstream it was clear that the best action was downstream under the overpass.  Mike and Charlie (figure 3 &4)) were the first two from the FR # 14 who netted a white fish and brown trout in the elusive and deep waters of the underpass and yes there was van (FR Van) parked down by the river.

The guide, Will, showed everyone some new, and interesting ways to rig flies.  Most everyone fished with a strike indicator, two flies on a dropper, and a bit of split shot set up to touch the stream bottom.  This kept the setup from hooking on rocks.  However, “Doc” Smith hooked up his big brown on a streamer leech pattern.  You never know what the fish will eat.

The next two days were primarily spent on float trips on the Big Hole River.  The most fish caught by one boat had to be Tim Pierce (Tidewater, VA) and Doc Smith (Winchester, VA) with a total of about 40 fish and seems to be some honest ribbing about an “unverified 21 inch” Trout caught by Doc Smith, however there was a verified 19 inch trout caught by Bo Tye (Fredericksburg, VA).

However, Bill Harvey and Scott Martin ran off about two hours away trekked through beautiful BLM area to arrive at the Ruby River for the final day of fishing.  The wade fishing recommended by the guide was a challenge on the Ruby, but the fish were biting and between the two (Scot (5), Bill (3)), they netted 8 beautiful fish (Rainbows & Browns) and gained some appreciation for the history of the area provided by Chris the guide (30 Year retired school teacher).

Again, everyone caught trout of some kind including grayling.  But no one landed the elusive brookie.  Therefore, there was no winner of the “grand slam of Freedom Ranch.”  However, a few folks did try to change the rules post fishing.

By the end of the week everyone agreed that the fishing and the comradery was more that worth the effort to get to Freedom Ranch.  There was also a unanimous agreement that an extra week or two should be added to the trip.

This was a most impressive group of vets.  Listening to stories of military service coming from multiple generations was fascinating.  Everyone realized that no matter in what era you served, the stories were the same.  Only the geographic locations changed.

This quote from Shakespeare truly sums up what the entire week meant.  Henry is addressing his troops on the evening before the Battle of Agincourt:

From this day to the ending of the world,
We in it shall be remember’d;
We few, we happy few, we band of brothers;
For he to-day that sheds his blood with me
Shall be my brother.

And that is what we became, a small band of brothers.  Brought together by the love of fly fishing, and the sacrifice of military service. 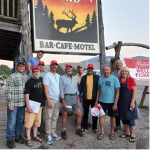 Veterans Discover the Magic of Montana at Freedom RanchAnnouncements, Freedom Ranch for Heroes, In The News, Regional 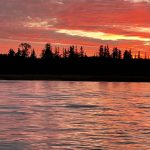