Breaking Through: The Larry Fivecoats Story

“Breaking Through: The Story of Larry Fivecoats”, was written and directed by Colorado fishing guide-turned-filmmaker Scott Thompson. The film shares the story of Larry Fivecoats and the restorative power of fly fishing through the Project Healing Waters Fly Fishing program.  This powerful film received well-deserved accolades following its screening at the G.I. Film Festival and during the Fly Fishing Film Tour in 2015.  Thanks to Thompson’s generosity and support we are honored to share the film, in its entirety, below.

Larry Allen Fivecoats peacefully passed away at age 71 on July 18, 2018 after a two-year battle with cancer. He was a source of strength and inspiration for those that were fortunate to know him and is deeply missed by all in our Project Healing Waters family.

Scott Thompson, the films director reflected upon the film and his time with Larry: “I wrote and directed this film while serving as a volunteer for Project Healing Waters in 2014. After several years in the program, I was blown away by the healing power of fly-fishing on men and women who served our nation and was compelled to tell their story. I originally was going to make the film featuring the stories of 3 veterans. After interviewing Larry for 45 minutes on the phone, I knew that the film was all his. This film was produced with little or no money and was a project of love for myself, Jerry Vogt, Matt Morgan, and Trina Bivens. The film was featured in the Fly Fishing Film Tour in 2015, and the G.I. Film Festival in Washington DC the same year.

I am sorry to report that Larry Fivecoats, the films protagonist, has since passed away of pancreatic cancer. Larry had a way of communicating the horrors of war and the beauty of redemption like no man I will ever know. I was fortunate enough to spend time with him the day before he passed. When I walked in the room I saw a man that was in great pain, exhausted, and mostly incoherent from the pain medication. After a few minutes we started to talk about fly-fishing and all of that pain and confusion disappeared for that moment. We laughed about the good times and gave each other shit for messing up this cast or losing that fish. It was beautiful. As was Larry. My heart goes out to his beautiful wife, Trish who endured Larry’s pain, and celebrated his life’s victory along his side.”

Larry Fivecoats served with the 173rd Airborne Brigade in Vietnam in 1966 and 1967. In that time, Larry was involved in over 150 firefights and witnessed very heavy casualties. When he returned from war, he found himself struggling with the lasting symptoms of PTSD and depression, and began to contemplate suicide. Then Larry was introduced to Project Healing Waters Fly Fishing

“I hurt so much, and I couldn’t figure out what was wrong with me,” Larry Fivecoats shares in the film, “The program itself has given me the capability, I think, to go fishing on my own. Not isolate, but go fishing. I don’t know if it’s the water, I don’t know if it’s the sound of the water, or the motion of the fly rod, but being able to concentrate on something other than my own thoughts is amazing. It’s so lifting. … The endorphins, I think, kick in in the brain and say, ‘I want more of this. I want more of this feeling.”

Fly fishing is many things to many people.  For most it’s a really fun activity to participate in a few times a year.  For some, it is a career, an escape, and even a lifestyle.  But listen for a while to what it means to Larry Fivecoats and the thousands of other veterans whose lives have been transformed by Project Healing Waters; and you may begin to appreciate the greater purpose we are all called to in life”. – Scott Thompson, Writer & Director

“It’s all there. All the pieces can come together in fly-fishing. Even for individuals who have been to the ends of the earth and have been through hell, there’s still fly-fishing out there.” – Larry Fivecoats, 173rd Airborne Brigade 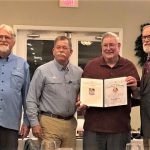 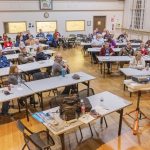