“George worked with me back in those very first days at Walter Reed, when we both saw the value that classes in fly fishing and fly tying could have for the many service members at Walter Reed who were recovering from all varieties of injuries and disabilities,” said PHWFF Founder and President Ed Nicholson. “He was there as we sought the necessary approvals to start what has now become a national organization.”

PHWFF provides fly fishing, fly casting, and fly tying instruction for wounded military personnel and disabled veterans through their various programs across the nation. Since its inception, PHWFF has been helping disabled active duty personnel and veterans overcome the obstacles associated with their injuries and disabilities.

Gaines, a long-time member of the PHWFF Board of Trustees, also serves as the Executive Director for the Trout Unlimited Conservation and Fishing Youth Camp for Virginia, West Virginia, Maryland and the District of Columbia.

“I am delighted that George Gains has accepted the responsibilities of Regional Coordinator for PHWFF,” said Warren R. Phillips, CEO of Project Healing Waters Fly Fishing.  “He and I both share the honor of being President of the National Capital Chapter of Trout Unlimited.  I know George will bring years of experience in both fly fishing and management to the task and I welcome him to the ranks of regional coordinator,” he added.

Gaines is taking over the position currently held by David Folkerts, one of the program’s original Walter Reed participants who also serves as the Plans and Operations Manager at PHWFF’s national headquarters.  When Folkerts joined the national staff in 2008, there were about 35 programs to oversee. Today, with the organization’s growth to more 130 programs nationwide and new ones being added, he felt the need to hand off the Regional Coordinator responsibilities.

“George has been a great supporter of PHWFF from its inception at Walter Reed in Washington, D.C.,” noted Folkerts.  “His passion for PHWFF and experience will serve him well as he takes on the duties of PHWFF Regional Coordinator for the National Capital Region.” 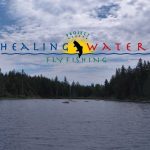 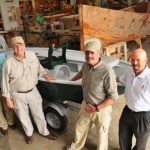