Sometimes mother nature changes the equation but this dedicated team of volunteers and participants adapted for a great day and many memories.  Many thanks to the Ned Smith Center for Nature and Art for hosting us and Lykens Valley Golf Course for lodging.  Special thanks to participant Dan Miller for the following update:

The Inaugural Project Healing Waters Fly Fishing Regional Pennsylvania 2-Fly event was a blast. Although the evening prior to the event the Pennsylvania Mid-state was beaten down with heavy precipitation, the event was still held and a fun day for all the participants. When I arrived at the event, I was a little apprehensive. I had driven by Powell’s and the Armstrong Creeks and had noted the flows and chocolate water prior to the event. But when I arrived all these thoughts quickly disappeared.
In the morning I met a friend and fellow participant, Lenny Snook, we were both excited. I knew the work that had been put into the event and hoped that it wouldn’t have to be moved from the Ned Smith Center for Nature and Art (Wiconisco Creek) to Clark’s Creek. I was very concerned that it would not be able to take place at all. But when I arrived Glenn Klinger, the Harrisburg Project Healing Waters Program Lead, had already walked and accessed the beats. He stated that the water level was very high and muddy, but with some caution may still be waded and fished. But more importantly, when I saw the familiar faces of the Harrisburg Volunteers and Participants, and some familiar faces (and some unfamiliar) faces of participants from across the region (Erie, Kunkletown, and Altoona), I became much more relaxed. The event was on and it was going to be good.

With all events that I have participated in with Project Healing Waters, the sense of camaraderie has become the most important to me personally. The volunteers, the guides, and the participants find a common ground within the sport of Fly Fishing. Our life journeys are different, our service may have been different, and the way we communicate, and act is a little foreign to the average bystander. But we are in, without a doubt, a family. Today the 13th of April 2019, was a difficult day to fish the Wiconisco Creek, but it was an outstanding day to try and fish the “Wic”.

The event was comprised of 6 teams, 3 teams from the Harrisburg Chapter of PHWFF, and a team from Altoona, Erie, and Kunkletown. We started the beginning of the day with 2 flies per contestant and when each of these two flies were lost the contestant could either borrow his partners fly or sit out the rest of the competition. In the morning while preparing our rigs and collaborating with our partners, over flies, we drew numbers. The numbers separated a “beat”, or portion of the stream to be fished. We selected a beat for the morning and one for the afternoon. With the stream conditions, it became very apparent in the morning that keeping the flies was becoming more of a strategy then catching fish.

Me personally, I nymphed the edges of the stream where I thought a fish may lie in the high muddy water, while trying to avoid tree roots, overhanging branches, and other obstacles that might try to claim my fly. My partner Rich Kirkwood fished similarly, we both intently fished, focused on navigating a drift just right to fish that had a small optical window to see the presented fly. As noon approached, I had crossed the scenic bridge at the Ned Smith Center to fish the opposite bank. I was convinced that I should be able to produce a fish. The challenge became the enjoyment of the event. High muddy water, bank fishing with limited windows. The Wiconisco Creek has some great casting opportunities throughout the stream, but the high water made us very cautious to wade. As noon approached, we both came up short.

Lunch was outstanding. Glenn, his wife Cathy prepared burgers and hotdogs with a great deal of sides and deserts. No-one left with a complaint for food, or anything for that matter. Spirits were high despite lost flies and challenging water. I think we all fell into friendly conversation while thinking about personal strategies trying to produce a fish from the stream. The Wiconisco Creek is a Pennsylvania “Trophy Trout” Select Water. We knew the fish were there, but how to reach them was the common puzzle to decipher. At this point Glenn decided and announced to the group, we were able to use our full arsenal of flies for the second beat.
As we moved into the second beat, I became more adventurous and found myself drifting further into the current. I decided from the bank to wade the water. Even in this water, I find when I wade, I lose myself. Two hours drifted by rapidly as I tried to crack the code of the stream. I changed flies frequently until I settled on a drop shot rig, with a copious string of split shot, to get the fly in the pockets of water I wanted it to. On beat two, the stream again won. Fly-fishing is a competition with the environment. We were competing for the title of the 2-fly winning team, but by the end of the day, we were really competing with the Wiconisco Creek. An angler changing and adapting to the environment in hopes to produce a fish. Rich and I left the stream from the second Beat without a fish. The “Wic” had won. But we walked away in high spirits because we had had an outstanding day. We had enjoyed each others company and the company of our guide Scott Arentz. returned to the Ned Smith center the news that no one had produced a fish had traveled rapidly. I think all of us wanted to see a fellow participant with a fish in the hand. We all hoped for someone to have cracked the code. Glenn had not been discouraged with the news. Again, he was quick to adapt the competition. What the title came down to would be a casting competition. Much to the dismay of the writer (I love to fly fish, and it has become my number one outlet but all excuses aside, under pressure I am a lousy caster) but still excited that it would be a fair race to the completion of the event. Each team was given 3 casts and the best measurement from a plate was tallied for the team. Given the objective was to be closest to the plate, the team with the lowest score won the event. Those with the best casting became very apparent, there were some elegant, precisely laid casts that fairly took 1st, 2nd, and 3rd place in the competition. The winning teams were 1st, (Harrisburg)- Greg Bozovich, and Dave Emory; 2nd, (Harrisburg)- Mike Brecht, and Lenny Snook; and 3rd (Erie) Daryl Mosher, and Phillip Allen. Each place holder was presented a handsome plaque with their placement, and many generous donations from the Ned Smith Nature and Conservation Center, with first place taking the coveted Ned Smith print of “Sting of the Hook” framed and matted.

I sincerely thank (and can vouch that all participants involved thank) all that volunteered their efforts and supported the event. I thank the contributions from the Ned Smith Center for Nature and Art, and the Lykens Valley Golf Resort. And the tireless efforts of the Harrisburg Project Healing Waters Fly Fishing Program Lead, Assistant Program Lead, and volunteers. I look forward to our upcoming future events and the return of the Regional 2-Fly Event in following years. 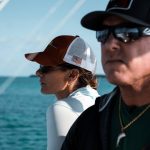 PHWFF to be featured on an upcoming episode of The Seahunter!Announcements, Regional