The Portland-Vancouver Program, was once again invited to the 2019 Pacific Northwest Fly Tyers Rendezvous, at the Oregon Army National Guard – Jackson Armory.  This show has been a long-standing tradition with us.  Along with 40+ other Pacific Northwest tiers we man a table with volunteers and participants tying.  The show is put on by: There were as many different flies tied as the species of fish we have in the Northwest Region.  Tiers did dries, wet/nymph, salmon, steelhead, streamers, sea run cutthroat, and even some amazing deer hair bass bugs.  A lot of people visited our table which gave us a chance to tell them about Project Healing Waters Fly Fishing, and what we do for disabled veterans in our area.  We also handed out swag which people loved.

The armory’s hall is the perfect site for this event.  Large enough where tiers were spread out, yet small enough where you could wander from table to table easily.  Pacific Northwest tiers are some the friendliest people you’ll meet and they were more than willing to show you their techniques and “secret” materials.  We are always asked to run the concession area because of our Program’s main cook, Jay.  He’s a magician with a smoker and I heard it described as a stick butter that tastes like BBQ!

Good times were had by all, big fish stories flowed freely, and lot of people were educated about our Program, Northwest Region, and Project Healing Waters Fly Fishing. 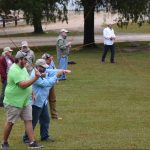 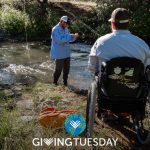 Heal Those Who Serve on #GivingTuesdayAnnouncements, In The News, Regional