The following update is provided by Gary Rihn, an event participant.

Potter County, PA, is often referred to as God’s Country. Recently a group of 15 military veteran flyfishers from Project Healing Waters Fly Fishing had the opportunity to find out why.

The group participated in the 4th Annual Project Healing Waters Fly Fishing outing on Kettle Creek at Cross Fork, PA, May 3-5, 2018. The event was hosted by the Kettle Creek Watershed Association. As in years past, the event began on Friday afternoon, as flyfishers from the Altoona, Erie, Pittsburgh and West Bradford PHWFF programs arrived around lunchtime. They attended a streamside casting session, with volunteers demonstrating helpful techniques to be used throughout the weekend. This was followed by a parade, led by fire trucks from the Kettle Creek Hose Company and a group of bikers with the Altoona Chapter of the PA Combat Vets motorcycle club, from the nearby town of Renovo back to Cross Fork, the setting for the fishing event. Afterwards, everybody sat down to a fantastic barbecue dinner, where they were introduced to their mentor that would accompany and assist them on the stream, then retired to the nearby Kettle Creek Adventures Lodge for the night, their accommodations for the weekend, for a bonfire and some sleep.

On Saturday morning, the veterans met up with their mentors and began fishing.  Trout were soon being caught, and released, up and down the stream.  Success was had on wet flies, dry flies, nymphs, and streamers.  At least two veterans managed to catch the “Grand Slam of Trout”, by landing a brown, brook, rainbow, and golden (or “palomino”) trout all on the same day. Two of the largest fish of the day were landed by Beverly Austin, a US Air Force veteran and first time fly fisher. “It was an awesome experience here today”, Austin said. She was also very impressed with the reception that she received in PHWFF and the Kettle Creek valley. Speaking as somebody originally from out of state, she commented, “I really like Pennsylvania, and how they treat their veterans”. Her mentor for the day, Kristina Miller, traveled all the way from New Jersey to volunteer her time and knowledge. This was Miller’s third year of volunteering to be a mentor. “There is nothing better than watching somebody trying fly fishing for the first time and experiencing everything about it. There are so many things to take in, so much going on, so many aspects, all these things have to gel, so when you watch somebody get and put all of those pieces together, it’s a pretty special feeling”, said Miller.

Besides the actual fishing, a large part of these outings is to allow the veterans to bond and heal, following the Project Healing Waters’ philosophy of “Healing Those Who Serve”.

One of those veterans was Bob McMillan, a Marine Corps veteran who served in Viet Nam, and now deals with balance issues which prevent him from safely wading in a stream. His mentor came up with the idea of actually setting a chair in the middle of the stream for him to use. “I got that chair out there, nobody’s ever done that for me before. I knew that getting out in the moving water was going to be tough for me, but Jason set up the chair out in the water; that was a whole new world for me”, said McMillan, who managed to catch numerous trout from his midstream position.

Besides assisting physically disabled veterans get back out on the streams, a large part of the Project Healing Waters mission is to help veterans with the sometimes hard-to-see symptoms of Post Traumatic Stress Disorder.   Austin noted, “I don’t talk to a lot of civilians, cause they don’t have a lot in common with me. I was happy to see other women here, cause I’m an outdoorsy person, so when I meet another woman who likes the outdoors I’m really excited. It helps me to not isolate myself”. Her mentor Miller followed up with, “I’d like to build on that. It’s asking a lot to have somebody go somewhere you’ve never been before, and do something you’ve never done before, with a bunch of guys you’ve never met before. That’s intimidating for anybody. But Beverly was amazing!”

Another mentor, Jim Reese, looked back at his day fishing with a veteran this year. He reminisced, “We talked about everything while out on the stream, we bonded well that way too; it wasn’t just me on the water teaching him how to fish, it was conversations talking about families, talking about vacations, just everything”.

Midway through the day, the veterans took a break for lunch. When they walked into the fire hall, they were surprised to find a very special and personal treat waiting for them. On every table, they saw handmade placemats. These were made by first and second grade students at the Apollo-Ridge elementary school. Their teacher, Mike Saxion, co-founder of the Lively Legz fly fishing company and a mentor at the event, explained how he introduced his students to the PHWFF concept.

“Prior to making the placemats, we had a very nice talk about who veterans are and what they have done for our country. I explained the sacrifices that these men and women make. I also explained, in terms that they could understand, how the mental, physical, and emotional effects being in a branch of the military can impact one’s life. I explained what Project Healing Waters is, and why it was formed. The questions and discussions we had were amazing and I truly feel the students not only have a better understanding of what veterans are, but also have a great deal of respect for what they did”, said Saxion.

After spending the rest of the afternoon fishing on the stream, the veterans took a short break at the lodge to rest and get cleaned up before returning to the fire hall for the Kettle Creek Watershed Association banquet. There, they were treated to another sumptuous meal, while listening to a presentation highlighting the mission, accomplishments, and future projects of the KCWA.  The improvements to the watershed and progress so far have been impressive. The stated goals of the KCWA, to enhance, preserve, monitor, protect, and restore Kettle Creek in north central Pennsylvania, have resulted in huge improvements in water quality, erosion control, acid mine drainage control, fish habitat, and more.

At the banquet, the veterans, mentors, volunteers, KCWA members, and local residents all had the chance to mix and meet new friends. One of the younger veterans, Josh Butler, is a Marine Corps veteran who served in Iraq. He tries to recruit younger veterans for PHWFF as well as his local veterans’ organizations. “You’ve got the guys from World War 2, Korea, Viet Nam, but nobody’s coming in from my era. I get a lot of joy, a lot of happiness, being around all of the other veterans from the earlier era, from Viet Nam and Korea. I really like hanging out with those guys”, said Miller.

McMillan looked at from the opposite end of the spectrum. “Having the young guys in tying flies with us, those guys from Iraq and Afghanistan, it’s enjoyable talking to those guys. We’re getting older, these guys are younger, they’ve got different attitudes, I really like their attitudes”. He likes being able to share friendships and bonds across the different groups, and considers it an excellent alternative to more conventional therapy. “It gets to the point of always talking about combat; I just don’t want to do that any more. Talking with these guys is just right”, he said, referring to his fellow PHWFF participants. This year’s event was the 4th annual KCWA/PHWFF Kettle Creek outing. Reese has been a mentor and part of it since the beginning, and has been impressed with its growth. He noted that, “The excitement level of the guys goes up every year. The groups do an even better job of organizing this event, constantly changing for the better each year. I can’t wait to do it again next year”.

Project Healing Waters Fly Fishing, Inc’s mission statement states that the organization is dedicated to the physical and emotional rehabilitation of disabled active military service personnel and disabled veterans through fly fishing and associated activities including education and outings.

McMillan concurred, “This is probably one of the best things going for guys like us”. 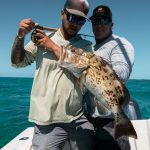 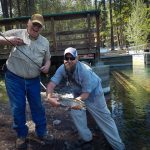