The Southwest Region has recognized two Volunteers-of-the-Year Award winners for 2017.   With 18 programs working in 25 different locations, it was impossible to select just one winner this year.   In addition to a framed certificate, each received a travel rod with the PHWFF logo woven by one of our participants. Norm Johnson is one of two Southwest Region Volunteers-of-the-Year for 2017.    He started the Phoenix PHWFF program 2013, later opened satellite programs in Gilbert and North Phoenix, and currently is expanding into Surprise, AZ.   Managing all these program locations, classes, fundraising events, outings and volunteers is challenging, but Norm has been masterful at doing so.  Norm’s leadership and management of the Phoenix program have served as the primary pillar for its success as it has grown to include 61 volunteers and 68 participants.  He has effectively organized and executed in all areas.

After working with the Phoenix VA Medical Center to initiate the program, Norm created some innovative classes.  One of the most interesting has to do with water safety.  He developed a training and testing program in which both participants and volunteers are certified for two years, and each person must certify in order to go on certain trips.  Those who don’t want to certify can still fish from shore.  Here is a summary of the certification classes Norm has devised.

Norm also created a drift boat training class in which participants practice getting in and out of the boat, fish from the front and the back, right and left sides.  This has proved to be particularly useful for some with mobility issues.   All boat drivers for the Phoenix program must have completed the AZ Boating Safety Course.

These various sessions result in improved confidence, less fear of the water, and, for the volunteers, knowledge that they have significantly contributed to the safety of the participants.

In another reflection of his organizational skills, Norm has planned the transition to a new Program Lead once he retires, which, unfortunately he plans to do the summer of 2018, although he plans to continue to help in the Surprise location.   Norm’s exemplary leadership, creativity, and dedication to our cause will be missed in the Southwest Region. Bob Widgren is the second Southwest Region Volunteer-of-the-Year for 2017.  He is a veteran living in Albuquerque, NM who has spent most his life involved with fly fishing.  Bob is well known in the southwest fly fishing community, having owned his own fly shop in Albuquerque for 20 years and still running a successful fly rod parts and rod building business.  He is also an FFI Certified Casting Instructor.

Bob has been the head casting instructor of the Albuquerque program for ten years in addition to lending 40+ years of fly fishing and guiding experience in New Mexico, across the west, and in saltwater venues.  Bob has been an overall program adviser, equipment consultant, educational instructor, rod building lead, on-stream guide, and donor.

Bob filled many roles for the program throughout 2017 and found time to guide veterans on a memorable day on the Conejos River in southern Colorado.  He created and delivered individual educational sessions related to reading the water, aquatic entomology, and rigging for dry/nymph fishing, as well as knot tying.  As equipment adviser, Bob repairs damaged program rods and reels as much as possible.

Bob’s ability to communicate the healing benefits of the cast itself makes the casting aspect of our program critical to our overall success.  Bob gives his time, ideas, and resources the Albuquerque program and he is the volunteer we all want and need.  He donates time, fund raising items, services, knowledge, and a true commitment to veterans and our program.  He does it with a smile and joy that makes even the newest caster not feel hopelessly lost as they start to use a fly rod for the first time and we all know this is not a simple task.

Both deserving individuals embody the kind of dedication to our cause that makes PHWFF unique.   On behalf of the entire region, congratulations Bob and Norm, and thank you very much for everything you do. 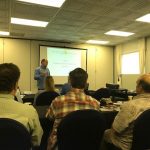