On May 12th, Project Healing Waters Fly Fishing Anchorage hosted a special volunteer recognition ceremony to honor four dedicated volunteers who have been associated with the program since it’s inception in 2010. Todd Desgrosseilliers, President and CEO of Project Healing Waters Fly Fishing, presented the Distinguished Service Award to Damond Blankenship. Damond never served in the military; however, his father did so Damond is well acquainted with Air Force life and moving from base to base. After his dad retired from the military in 1957, the family relocated to Alaska and homesteaded on Montana Creek in 1959. This is where Damond developed a love for fly fishing in the pristine waters of undiscovered rivers.

After going ‘outside’ to earn his college degrees he devoted his early career to working with youth in southern California. Alaska draw was strong and beckoned him back. So he, Debbie, and their children moved to Alaska and Damon entered Alaska’s building trade. An unexpected turn of events occurred with a major work injury after which he returned to his fly fishing love and became a professional fishing guide on the Kenai River.

When the Alaska Fly Fishers initiated the PHW program in 2010, he immediately volunteered to staff tying clinics. A year later, he volunteered to co-lead the program and has been generously donating his time and energy ever since. He does it all – teaches fly tying, rod-building, fly casting, and fishing education and helps in the planning and organizing of many activities. In addition, he frequently takes participants out on his own boat after guiding all day.

Damond is an outstanding mentor. Emotional rehabilitation can often be challenging process. Damond brings unique skills by weaving his training in social science with his passion for fly fishing and an easy, but no nonsense manner, to model positive behaviors and supportive corrections when needed. He speaks openly and honestly in a manner that allows even difficult discussions to be heard and absorbed. He is one who participants admire and from whom they can accept the sometimes-hard truths needed to move forward in rehabilitation. Damond is truly the “heart and soul” of healing in the program. 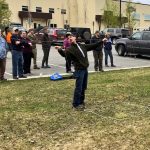