Camaraderie and healing on the Whitewater River

On Saturday, April 13, Paula Gray and Benji Kohn stood in the still snow-covered grounds of the modern group center at Whitewater State Park. The duo passed a fly fishing rod back and forth, with Kohn sharing casting techniques and Gray giving them a try. Soon, Gray would head out on the Whitewater River to see if she could catch some trout with her new skills.

Kohn is an education coordinator for Minnesota Trout Unlimited. On the weekend of trout opener, he was at Whitewater State Park as a mentor for a special program held to celebrate the park’s centennial. In coordination with Project Healing Waters, Whitewater State Park invited disabled veterans to spend the weekend at the modern group center for a fly fishing camp. The veterans learned to fly fish from volunteer mentors, like Kohn, while enjoying the great outdoors and the camaraderie of fellow veterans.

Project Healing Waters is a national non-profit organization that uses fly fishing as an avenue to provide physical and emotional rehabilitation to disabled veterans. David Winkler, the program lead for Project Healing Waters Fly Fishing Twin Cities, started as a participant in the program, and has personally felt its benefits. He said, “I’ve seen firsthand what the actions of fly tying and fly fishing can do to help with the healing, physically and emotionally, of all veterans groups, regardless of age or disability.” Winkler has been involved with Project Healing Waters for three years. Although he started as a participant, he soon became a volunteer, then later an assistant program lead.

Whitewater State Park Naturalist Sara Holger invited Project Healing Waters to the park, and handled the majority of the logistics for the fly fishing camp. The volunteers and veterans arrived on the afternoon of Saturday, April 13. Winkler said, “We’re taking advantage of all the work that Sara has put into it. Kudos to her and many thanks.” After getting situated in the cabins, the veterans and volunteers gathered around the fire for conversation in the main lodge of the modern group center. Later on in the afternoon,

the volunteer mentors worked one-on-one with the veterans to teach them to cast. Then, the teams of two tried their luck on the Whitewater River. On Saturday evening, the veterans enjoyed a free meal from Mike’s Food Center. There was also an evening speaker and a demonstration on fly tying. The fly fishing camp continued through Sunday, with more opportunities for guided fishing. The entire weekend, including the overnight lodging in the modern group center, use of the equipment, the meals, and the guided instruction, was free for the veterans. The
participants also received a free fly box, plus twelve flies that had been tied by local disabled veterans.

Approximately a dozen veterans participated in the fly fishing camp. The only requirement for their participation was a VA-recognized disability. “We don’t ask what level of disability,” said Winkler. “It’s the only thing that is a requirement, at least for participation in Project Healing Waters.” Through his association with Project Healing Waters, Winkler has met veterans from all
branches of service. Although he is now a mentor, or guide, in the program, he shied away from calling himself an expert. He explained, “We’re there more as helpers. Once you get to know somebody and you do this with people for a while, you consider yourself a mentor.”

The main role of the volunteers is to provide support. They know enough about fly casting to help novices get started in the sport. Winkler said, “It’s more of a planting of the seed, for those that want to continue. Then we all grow together.” Above all, Winkler was hoping the veterans had a good time at the fly fishing camp, and perhaps were encouraged to continue on in the sport. He said, “For me, and I think for all the volunteers, when all is said and done, what we really hope to achieve is to see the veterans enjoy themselves, have fun, walk away with a smile on their face, and perhaps plant a seed for those who have never fly fished before, to participate with a Healing Waters group someplace.”Winkler added, “What we want to do is see veterans walk away and say, ‘That was a lot of fun. I’m glad I invested the time and effort to come down.’ That’s what we’re really
looking for.”

Beyond fly fishing, the camp at Whitewater State Park was a time for camaraderie. Most of the conversation centered on fishing – rarely did talk wander into anything military- related. However, Winkler noted that people that have served in the military have a different outlook in life, one that can only be understood by others that have served. “It’s the camaraderie that most of us miss,” said Winkler. The participants will joke around and give each other a hard time. They will also take the opportunity to vent. “This provides that outlet for a lot of people,” said Winkler.

The closest Project Healing Waters group is in the Twin Cities, but Winkler hopes that will eventually change. He wants to see a group develop in southeastern Minnesota, either out of Rochester or Winona, and would offer any support to someone willing make that move. The only requirement for starting a group is a local sponsor, such as a local trout organization or fly fishermen’s organization. “We’d certainly be able to do a little bit to help them out from the Twin Cities,” said Winkler. “It’s so much fun. It’s so much fun,” he added.

Volunteer Support
Project Healing Waters is a success due to its volunteers, people that are willing to donate their time in order to share their knowledge and love for the sport of fly fishing. “The
volunteers are so great here,” said Winkler. “They are so interested in helping people…They are just so willing to give their time to make sure these people have a good experience.”
Winkler has 115 volunteers on his list for the Twin Cities chapter of Project Healing Waters. Although some can only help out two to three times a year, Winkler noted that
they always turn up when they are needed. Veteran and Project Healing Waters volunteer Bots (“It’s the only name I go by”) noted about the program, “If it wasn’t an organization I believed in, I would not be here.” He added, “The volunteers through Project Healing Waters fly fishing are some of the greatest people you’ll ever meet. Everyone one of them is dedicated….They are
interested in helping you in any shape or form they can.” A veteran of Vietnam, Bots remembers a time veterans were not well-received, and thus is skeptical of people when they say that they are there to help. Yet, with the volunteers with Project Healing Waters, he observed, “These guys are genuine. They really are.” 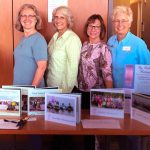 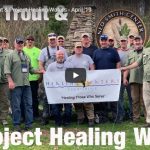