“Camaraderie is the glue that keeps the program together” Over the last few months I have had multiple people tell me about two very special Project Healing Waters Fly Fishing participants.  When I found out that I was going to attend an event with them, I was very much looking forward to it.  We were all descending on the town of Lebanon and Big Cedar Creek in Southwest Virginia where on May 11th and 12th property owner Jake Musick and the Riverbound Extreme Fly Fishing Club hosted a total of nine Project Healing Waters participants and twelve volunteer guides from across the state.  This particular event is exceptionally notable since this is the venue used by Project Healing Water’s founder Ed Nicholson ten years ago when he brought some of the first participants from Walter Reed.  The community fully backed the event with Hotel 8, Pat’s country Kitchen, Bonanza, and American Legion Post 208 all offering generous support. Lowe’s also helped by providing lumber at cost which in turn, allowed James Christian, George Owens, and Doug Harris to rebuild three casting/wheelchair platforms with plans to build three more.  Given that three of the nine participants have some type of mobility issue, this effort made a big difference in having a safe, accessible place for these veterans to fish. My responsibilities at the event were minimal; rove around to make sure everyone was safe and  following the club’s rules, filling in for other guides when they needed a break, and to offer assistance in netting fish, taking pictures, or untangling lines.  In the course of my duties though, I heard one group long before I saw them. When I walked up to Mike Doyle who was being guided by Bob Reynolds and Bill Bainter there was a considerable amount of banter going on as these gentlemen were discussing exactly who should be blamed for a lost fish.  During the introduction it came out that I am an Army veteran and that Mike is a Marine.  He made fun of the Army. I made a Marine joke.  Then we both made fun of the Bob and Bill who are Navy vets and decided that we just might get along. Mike was a Communications Chief that finished his career at Cherry Point after 17.5 years of service when a progressive disease claimed his eyesight and forced a medical retirement.  Although he first heard about our organization several years ago he did not start fly fishing with Project Healing Waters until about a year and a half ago when he agreed to attend an event at Green Hill Park in Salem Virginia.  When I asked Mike what he would tell other veterans he responded, “Do it. Try it. You have to trust that people care and get out there.” To watch this team fish is inspiring.  One guide would stand over Mike’s non-casting shoulder and give directions like, “Cast to the one o’clock, more line, upstream mend, strip in the slack” while the other guide had a second rod ready in the event of tangles or the need for a different fly.  When it was time to switch spots the guides would assist through the offer of an arm and constant communication.  Mike went on to say that, “Camaraderie is the glue that keeps the program together” and from what I could see, this group of fisherman defined camaraderie.  At their suggestion though, I traveled a little farther down the creek to speak with Mike’s friend.

The first thing I noticed about Clyde Compton is that his entire body shakes when he laughs – and he laughs a lot.  Joking with his guides James Christian and George Owens during a discussion about fishing aptitude I introduced myself.  His positive attitude was contagious and it was not long before we were all laughing.  Clyde too had tried fly fishing after learning about Project Healing Waters through an advertisement his wife saw at a VA Hospital and now stays busy with Project Healing Waters.

It should be noted that Clyde is an Army veteran that lost his eyesight in 1997 due to diabetes.  More recently, he sadly lost his wife of 41 years and had a leg amputated six months ago.  When I asked him the same question that I asked Mike, he became serious and responded, “Take things one day at a time.  Don’t rush it, set goals, and throw the word “can’t” out the window.  It may take longer, but you can do it.  Don’t give up the fight.”  Fishing from the aforementioned wheelchair platform, this team operated in much the same manner as Mike’s with the guides communicating direction and distance and Clyde making the casts.  Heavy rains the night prior to the event made conditions tough but all participants still caught fish. At lunch I had the pleasure of meeting Clyde’s daughter, Cindy, and asked how her father’s involvement with Project Healing Waters affected the family.  She replied, “I know that he is going to be taken care of and treated like a normal person.”  I think Cindy sums it up for a lot of us. Bangor ME Veterans and Volunteers Work to Minimize Pollution in their Local RiversNew England, Regional 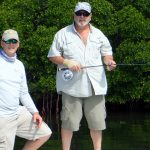