Local non-profit gives back to those who served.

When Powell resident and Army veteran Larry Smith injured himself on the job a couple of years ago, he found himself with a lot of time on his hands.
“I had to find something to do until I got healed up,” Smith said. “I’ve been swinging a hammer for 35 years; it’s all I knew how to do.”

To fill some of that time, he began tying flies, becoming so proficient at the intricate hobby that he turned it into a side business. He started a website, Under the Bridge Ties, to sell his wares. He also began to donate some of his flies to Project Healing Waters Fly Fishing, an organization that began in 2005 at Walter Reed Army Medical Center in Washington, D.C. The primary purpose of the organization is to provide therapeutic outdoor recreation for disabled veterans, usually in the form of fly fishing. Intrigued by the idea of helping veterans, Smith thought he would volunteer his expertise in fly tying instruction to the organization’s local chapter.

The only problem? There wasn’t one.

“I would have [had] to go all the way to Casper or up to Bozeman in order to tie flies for two hours,” Smith recalled. “One of the biggest fly fishing places in the country, and we don’t have one? Ridiculous.”

Smith placed a call to the group’s headquarters to inquire as to why there wasn’t a chapter in Park County. The answer he got was simple.

“No one ever wanted to put one there,” he said. “That’s what they told me. So I told them, ‘Well, I do!’”
Things moved quickly after that, with Smith filling out all the necessary paperwork to start the local chapter, appropriately named Cody-Powell Project Healing Waters Fly Fishing. The group had been hosting two fly-tying meetings a month, one in Cody and one in Powell, as well as scheduling fishing trips for the veterans. With Smith now healed from his injuries, he’s had to cancel the fly-tying meetings until fall to go back to work.

“But we’re still doing the fly fishing trips, stuff like that,” Smith said. “We’re always, always working on something new.”

Fly fishing trips aren’t the only service the Cody-Powell Project Healing Waters Fly Fishing provides. Last year, the chapter constructed a 130-foot sidewalk for George Holcomb, a retired veteran wounded in Vietnam who eventually lost one of his legs. An accomplished woodworker, Holcomb was the subject of a feature story in the Tribune last year, highlighting a fishing boat he built by hand.

When Smith paid Holcomb a visit to his home in the Willwood area shortly after the article ran, he noticed the distance between Holcomb’s house and workshop was 130 feet of broken terrain. Figuring he might be able to help, Smith and the Cody-Powell PHWFF returned a short time later with everything needed to create a concrete path from the house to the shop.

“We were the first PHWFF chapter to do a project like that,” Smith said. “What we do, it’s not just about fly fishing. If a veteran comes to town and needs assistance with food or rent or something to get started, we help them with that.”

But fishing is the activity that brings everyone together.

“Some guys don’t want to fly fish,” he said, laughing. “So I got all the stuff to make spinners, fly rods, we just build as we go. My wife Tina and I started this; we both run the program, and if anyone wants to fish, they just need to give me a call and we’ll work out something with somebody.”

Time, money and equipment have been generously donated since the program’s inception, something Smith said he doesn’t take for granted.

“We get help from guides, or people with boats, you name it,” he said. “People just want to fish with these guys and girls. And it costs them nothing; we pay for everything. We provide waders, all the equipment, they don’t even have to have a fishing rod. We will provide it for them. We just want something special for the veterans, they deserve it.”

Tim Wade, owner and outfitter of North Fork Anglers in Cody, has worked with Project Healing Waters since the local chapter’s inception. Wade has worked with similar chapters in Colorado, Sheridan and Buffalo, and was pleased to see one begin in Park County.

“I think it’s a very good program,” Wade said. “I think we could use more turnout by the vets. We have plenty of volunteers, but it seems the difficulty is the volunteers show up more than the vets do.”

Wade said there could be any number of reasons more vets have not reached out to Project Healing Waters, but volunteers will continue to get the word out. For vets who are perhaps on the fence about giving fishing a try, Wade would tell them to put their fears aside and rest assured that everyone is there to help them get better.

“If it takes baby steps, we’ll walk with them every step of the way,” Wade said. “If they want to take big steps, we’ll be there for those as well. I would tell them not to be self-conscious about their condition; it’s a good time to begin the healing process. This program is truly about them.”

Having guided vets on earlier trips, Wade said getting them on the river and into some fishing is a humbling experience, one that he never tires of.

“You’re dealing with people that have given their bodies to the safety, health and welfare of our country,” he said. “What we walk away with from it is an appreciation of the human spirit and the determination that these vets have to be a functioning part of society. It’s very rewarding as a guide to see these men and women come out of their shells. You just see the joy, you see some of that pain go away. For a short time, they’re kids again.”

Smith said the communities of Powell and Cody have been very supportive of the program, as have people across the nation. The Cody-Powell Project Healing Waters Fly Fishing held a recent online auction that raised $5,300 in a week.

“I do business with fishermen from all over with the flies I sell,” Smith said. “I put the auction up on the Facebook page, and the next thing I know, I have guided trips donated from all over the country. I got a hog hunt in Texas donated to me; fly rods, fishing vests, stuff just came pouring in from all over for this auction for our local chapter.”

If someone had asked Smith a couple of years ago if he could have foreseen all of this unfolding the way it did, he would have laughed and shaken his head.

“I’m a firm believer that God puts me in every place for a reason,” he said. “In every place I’ve ever been, something good has always come of it. When you’re hurt and not making money, and selling off your things to pay the bills, things can look pretty bleak. But you just have to keep the faith, and believe that good things are going to come of it.” 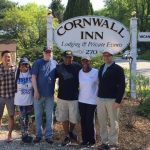 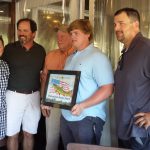