We are thrilled to share the seventh update from Gerry and Rex Leonard who are hiking the Appalachian Trail to raise funds and awareness of Project Healing Waters Fly Fishing (PHWFF) and the disabled veterans we serve. In this travel log entry, they highlight the wildlife, awesome camping spots, Americana, and the way ahead. Be sure to view the incredible photo gallery at the bottom of this post!

Greetings from Delaware Water Gap, Pennsylvania. We wanted to provide everyone with another update before we march across PA. Since our last update, we have walked 110 miles, finished New York and New Jersey, climbed nine mountains, and crossed the Delaware River along I-80 into PA. Along the way, we feasted on some of the best deli food in the world and saw more wildlife than we ever did in New England. New York and New Jersey do not get enough credit from the hiking world…the scenery in both states was amazing and unique, the campgrounds and shelters were terrific, and the terrain was ideal for knocking out big mile days. We loved New York and New Jersey. If y’all want to have fun, see wildlife, learn about America’s past, and enjoy some magnificent sunrises and sunsets…take an overnight hike along the AT in either state. Remember to follow the white blazes! Here are a few highlights from our trek across NY and NJ.

Wildlife. After we crossed the Hudson River, we passed through a zoo (free for AT hikers) at the base of Bear Mountain in New York. In the zoo, we saw bobcats, coyotes, foxes, and bears. Because we thought this might be our last chance to see big animals, we spent most of our time taking pictures of the bears…so we could have some proof of seeing them during our trek. Boy were we wrong about our last chance to see big animals. Since crossing the Hudson, we have seen multiple bears and hundreds of deer…some up close and personal. My favorite was watching a mother bear and two adorable cubs run by us (about 50 feet away) after we spooked them. Rex’s favorite was watching a large male bear burst out of a thicket on the opposite side of me as I walked by it (about five feet away). Fortunately, the bear was afraid of people or I might not be sharing this experience with you! We hope to get a picture of a bear in the wild before our journey ends, but thus far, our encounters are short and quick. The pictures of the zoo bears may be as good as it gets! Besides bear and deer, we have seen tons of different birds, including hawks, owls, vultures, and giant woodpeckers, and, while not my favorite, we have encountered timber rattlesnakes and copperheads. Finally, a group of professional birdwatchers we met atop a mountain in New Jersey settled a debate Rex and I have had since Maine. Apparently the bird I’ve been calling a “black hawk” is in fact a turkey vulture as Rex has been saying all along! Rex…I was wrong, you were right.

Awesome Camping Spots. The AT is littered with with shelters, cabins, and tenting spots…and when you pass through a town you can often find a hostel, church, business or home where you can pitch a tent or find a bed. In NY and NJ, we found some really neat places to stay. One shelter we stayed at on a mountain in Harriman State Park provided a tremendous view of NYC, 34 miles to the south. The reflection of the setting sun on NYC’s skyscrapers was magnificent and the city skyline at night was amazing and not something we expected to see on the Appalachian Trail. Another favorite shelter was on a farm where the only farm animal was a friendly donkey named Jake. Jake loved people…he would greet hikers when they arrived and would nudge them or stomp on the shelter porch if they ignored him. At night, Jake would stand watch in the field until everyone was asleep before retiring to his barn…and as soon as he saw movement in the morning, he’d trot over to visit. Another night, we slept on a cliff and watched a beautiful sunrise sweep across a valley filled with small New Jersey farms. Our favorite camping spot was an untraditional one in Warwick, NY. There we camped at a drive-in movie theater (for free!) and watched movies (3 screens, two movies each) until 1:00 AM. It was a great night and a refreshing change of pace…but it was not conducive to a good night’s sleep or an early start!

Americana. We loved hiking through New York and New Jersey’s small historic towns, parks, grassy knolls, and green pastures. Two of our favorite towns were Warwick and Unionville, both in New York. Unionville reminded me of Mayberry from the old Andy Griffith show. Its main street was lined with old Victorian homes and American flags hung from every telephone pole. In the center of the town stood a 150-year old general store that served deli sandwiches, ice cream, groceries, and hardware. Unionville belongs in a Norman Rockwell painting! Warwick was awesome as well. Besides the drive-in, Rex and I received a private tour from Mark Arnowitz, a local resident, veteran, and college professor. Mark showed us architecture from three separate periods in the town’s growth…the Revolutionary War period, the Civil War period, and the early 20th century period when Warwick was a vacation stop for families visiting the Catskills. My favorite was the Revolutionary period. Here, Mark showed us where Washington’s Army camped, where the British Army camped, and the inn where George (and Martha!) Washighton and his officers stayed during the NY/NJ phase of the American Revolution. Most interesting for me, we learned what happened to those British forces who were defeated by the Green Mountain Boys in Bennington, VT (see our 4th update on Vermont). It turns out those defeated British forces were Hessians…and after they surrendered, they were moved to Warwick and put to work harvesting iron from the mines in the area. Apparently, many of them stayed after the war and integrated into American society! I am confident, had it not been for this hike, Rex and I would never have visited any of these small towns. I feel fortunate…this hike has shown me just how special and beautiful America is. We’re lucky to call it home.

Way Ahead. Due to my bum knee, Rex and I have slowed down considerably. We have some serious catching up to do and as a result, we will not post our next update (#8) until we reach Harper’s Ferry. In the meantime, we will pass the 1000-mile mark, cross the AT half-way point, and finish out Pennsylvania, Maryland, and West Virginia.

Thanks for supporting us, our partner, Project Healing Waters, and our disabled veterans. 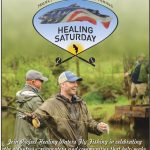