Thanks to a generous financial donation, PHWFF Newington CT traveled to Deerspring Lodge located in the Adirondacks region of upper state New York for its first overnight outing in 2022.

Our trip started on Monday, June 13th with 5 veterans and 1 volunteer traveling to scenic Merrill, New York where we were greeted by Deerspring Lodge owner Mary Murphy and her son, Newington Program veteran participant, Sean.  After a tour of the lodge and amenities, Roger presented our host with a custom-built multiunit birdhouse that he constructed and will be sited on the lodge property.

Monday evening, the group was treated to a delicious home cooked dinner prepared by Mary.  After dinner, the group planned for the first of two full days of fly fishing.

After a hearty breakfast Tuesday morning, we traveled to the Chateaugay River to fish.  The weather was spectacular and water levels and flow rates conducive for our veterans to safely wade and fish the river.

A number of fish were landed before lunch with Marcos catching a beautiful rainbow trout which turned out to be the largest fish of the trip.  After lunch on the river, Darin caught his first trout on a fly rod.

That evening, after a delicious dinner which included Mary’s homemade chocolate ice cream, we were joined by two local fly tyers who led the group in tying several local patterns, including Fran Betters famous Ausable Bomber.

Wednesday morning, after a pancake, bacon and eggs breakfast, the veterans headed back out on the river.  Our good fortune continued with Roger, Michael and Darin landing fish and Dave getting a couple on the line that unfortunately got away.  Marcos continued to land fish throughout the day.  Overall, the group landing 19 fish over two days and hit the trifecta, landing rainbow, brown and brook trout!

We wrapped up the fishing and headed back to the lodge for another fantastic dinner of pasta, meatballs and sausage topped off with freshly baked blueberry and apple pie from a local Amish bakery.  That evening we gathered to discuss our fishing adventures over the past two days and the good times and friendships we fostered and strengthened during the trip.  Awards were presented to Marcos for the first and largest fish and to Michael and Darin for the second highest fish total.

Our trip came to a close on Thursday morning after a pancake and trout breakfast.  The group thanked our gracious hosts, Mary and Sean, with new and renewed friendships and experiences before heading back home to Connecticut. 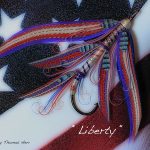 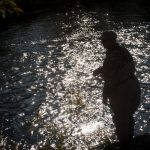