The Dominion Power Company is a staunch supporter of the military and veterans programs and as an organization demonstrates this commitment through hiring initiatives and volunteerism.   The first time I was witness to Dominion’s efforts was as a new participant at a Project Healing Waters Fly Fishing event that was sponsored by the company and run by employees.  I made some lasting friendships at that event and now, four years later, I attended another Dominion event only this time I served as a guide for another vet. Reinforced by a grant from the Guilford Foundation of Richmond, VA , the Project Healing Waters Regional Coordinator Ray Babineau and his Deputy Jim O’Brien outfitted twelve Veterans with everything they needed for a day and a half of fishing on Back Creek, just over the mountain from Warm Springs, Virginia.  Each participant received boots, waders, rain jackets, a fly rod and reel, sling packs, and flies that allowed everyone to have a safe and comfortable outing.  We based out of the Warm Springs Inn in the evenings but otherwise were based out of a Dominion facility in close locale to the creek. From a guide’s perspective conditions could not have been much better; the water flow and temperature were perfect, cool mornings were complimented by warm afternoons; the fish were abundant and for the most part willing.  After a hearty breakfast my participant, Jon, and I went to our assigned “beat” where we found a long pool with fish holding in a deep pocket of water.  We tried a few techniques and finally picked up our first fish on a streamer designed by Virginia Fly Tier of the Year, Chuck Kraft.  Once we cracked the code, the catch rates went up as did morale.  We landed eight beautiful Rainbows for the day and probably lost the same number prior to getting them to the net.  With the biggest fish at about 22 inches, it was a solid day. The reports at lunch and dinner were for the most part similar with some catching more and a few catching less but there was only one person who had not managed to land a fish that day.  Before anyone feels too bad about this though, I will tell you that when I checked on him the following day, he had landed six trout before ten o’clock in the morning.  Collectively there were over a hundred trout brought to hand. Collaborative efforts between Project Healing Waters and local organizations, Foundations, Dominion Power, and other businesses both large and small work well because at the heart of the matter, we all are committed to serving our nation’s soldiers and veterans.  While I have participated and volunteered for some time, there were many present that have been there since Project Healing Waters came to fruition over ten years ago.  It is safe to say that collectively we plan on serving those who served us for some time to come.

Collaboration and Camaraderie on the idyllic waters of TexasRegional, South Central 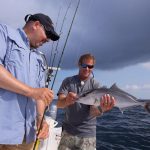