The final Freedom Ranch trip of 2018 was October 9-13.  Originally seven participants were scheduled for this week but one had to withdraw for medical reasons.  Then another was not able to go on the day of our departure.   In the end, five participants from all over the country and I as trip leader arrived in Bozeman, Montana. We were met at the airport by Marvin Johnson, a retired ambulance driver, who served as tour guide and font of information during the two-hour drive over snowy mountains and scenic landscape.   It is quite a drive, as we crossed the Continental Divide twice with spectacular views of the Bitterroot and Pioneer Mountains, and the Big Hole River valley, one of the most beautiful valleys in Montana.

Rachel Stepan, the trip host, is a caring and personable woman dedicated to making everyone comfortable, safe and happy.   Paula Krugerud is the volunteer ranch photographer, helper and cheerleader.  She printed professional quality 8 by 10 photos for each of us and emailed us even more images.    Their dedication to making these trips a huge success is so obvious. And then there was the food.   No one went hungry for five days, starting with the lunch at Bar 3 BQ in Bozeman after our flight arrived.   Huge portions but it was a great way to get to know each other over good food.    Dinner Tuesday night was at the Wise River Club.   We persuaded our host Tom Davis to sit down and eat with us; he was hilarious.  On Wednesday, Mike Murphy at H Bar J Saloon & Café fed us.   He had a banner on the wall with all the service medallions and the signatures of every previous Freedom Ranch participant.  We filled in the remaining spaces and then took a group photo.   H Bar J also prepared hearty and personalized breakfasts for us every day and delivered them to the lodge.   We were next hosted by the ladies of the Wise River Community Foundation under direction of Dawn Stodden for a healthy home-cooked dinner, and then on Friday we returned to the Wise River Club for a farewell dinner.   By this time, we were bulging at the seams with all the appetizers, entrees, and often home-made desserts, but the small-town hospitality, generosity and patriotism of Wise River were really touching and very much appreciated. Group 20 included Don Aird from Missouri, Jerry Willis from Georgia, Jim Heinrich of Colorado Springs, Mike Viramontes from Northern California, and Veronica Looney from Washington DC.   I was honored to be the Trip Leader on this the final trip of the 2018 season.  Cold, but honored.

Afterward, Jerry wrote: “The Freedom Ranch trip stands out as one of the most enjoyable fishing escapades I have had the honor of attending.  We had many great laughs, shared many stories and experiences.   I can say that I liked everyone on the trip and would love to do it again with the same group.   The hospitality of the citizens of Wise River was greatly appreciated and unsurpassed by anywhere I have been.  Rachel, Marvin and Paula were wonderful.   It is not often you are treated with such deference and respect.” And, from Jim Heinrich: “Upon my return from Vietnam, I would never have imagined anything like this being made possible for our veterans.  I even received a ‘Welcome Home’ award from Freedom Ranch which was nonexistent for Vietnam vets.   Upon my return home from my second tour in Vietnam, I wrote a poem about the thirteen months in hell I had spent in the jungles. Now maybe I will write one about the fantastic five days I spent in big sky country at Freedom Ranch. This is an experience I wish every veteran could have during his lifetime.”

Oh, I almost forget about the fishing.   When it’s as cold as it was when we were there, trout metabolism slows and they don’t feed as much, making them more difficult to catch.   After getting fitted for waders, boots and other equipment Wednesday morning, we fished in the afternoon at the Ranch.   Jim was the only vet who caught any fish that day.  On Thursday and Friday we fished with local guides using inflatable rafts.   Our fishing days were shorter because of the cold but most of us caught fish.  Veronica caught her first fish ever on a fly rod on Thursday and then on Friday caught a Grayling, a truly unique Montana species.  The river-dwelling population of the Arctic Grayling in the upper Big Hole River are the last remnants of this native Fish of Special Concern. It was very cold during our stay but at least the predicted rainfall and snowstorms didn’t materialize.   It did snow, especially on the eve of our departure, but that created a lovely farewell photo of the sunrise glowing on the snow-capped mountains, the Big Hole River valley quiet and peaceful, and the PHWFF van taking us all home. 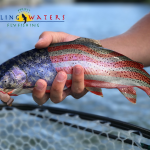 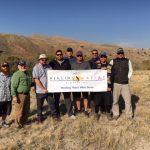