“Flies Tied by a Veteran”

By Daniel Morgan
June 29, 2017
Thomas Gadacz, President of the Florida Council of Fly Fishers International and a member of the Suncoast Fly fishers, shares a touching experience he had in June while tying flies with  veteran participants at the Bay Pines VA in St. Petersburg, FL :

Suncoast Fly Fishers has a very active Project Healing Waters Fly Fishing (PHWFF) program at the Bay Pines Veterans Administration Medical Center in St. Petersburg, FL .  The veterans tie flies, cast, build fly rods, and go on fly fishing trips.  It is very enjoyable and a gratifying experience. Last week I had a very touching experience.  Ted Rich and I were tying flies with two veterans in the late morning in the Long Term Care facility.  The veteran I was helping is Air Force and I am Navy so we compared experiences.  He has fished in the past all over the world but never fly fished.  Hs favorite place was Alaska and salmon was his favorite target.  We talked about fly fishing and differences between it and spin casting.  We also talked about the difference between salt and fresh water flies.  He chose a spider fly to tie.  He forgot his glasses but was able to lay thread on the hook shank and tie in a circular piece of closed cell foam.  He had a little trouble tying in the legs but got it done. It looked respectable.  The first fly he ever tied.  On his second spider we added some marabou at the tail.  Two nicely tied spiders.  I put them in a plastic bag and gave them to him.  He said I could have them since he no longer fishes and does not fly fish.  I convinced him to keep them and show them off to his buddies.  He was off to lunch and thanked us for the experience and would be back next week.  He had fun.

A nurse came by to wheel him to lunch and he showed her his flies.  She complimented him on the two flies and said she also fishes but does not fly fish.  But – she had a nurse friend who does fly fish and now lives in another state and they correspond.  He offered her the flies but she refused and replied that her girlfriend would be honored to have flies that were tied by a veteran.  His eyes lit up along with a big grin as he asked her to please send his flies to her. “Tell her the flies were tied by a veteran.”  It just doesn’t get any better than this! 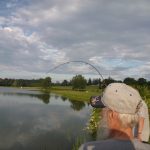 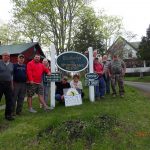